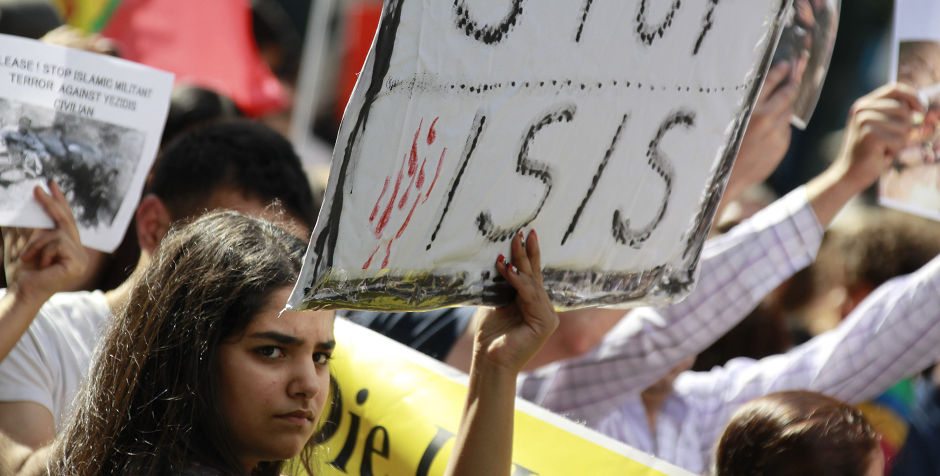 From mass beheadings of Christians and the institutionalization of rape to the celebrated torture and increasingly disturbing murder of its captives, the reign of ISIS – the Islamic State – is marked by a systematic and calculated annihilation of any minorities that stand in its way.

As the evidence of the ISIS-perpetrated atrocities continues to mount, a bipartisan group of lawmakers is calling on Congress to take direct action – to label the atrocities of ISIS for what they are: genocide.

Over 40 members of Congress have endorsed House Concurrent Resolution 75 which calls for Congress to acknowledge “that those who commit or support atrocities against Christians and other ethnic and religious minorities, including Yezidis, Turkmen, Sabea-Mandeans, Kaka'e, and Kurds, and who target them specifically for ethnic or religious reasons, are committing, and are hereby declared to be committing, ‘war crimes’, ‘crimes against humanity’, and ‘genocide’.”

As I have written before, ISIS’ actions are clear and flagrant violations of international law.

It is undeniable that ISIS has perpetrated thousands of war crimes, including directing attacks against civilians, murdering and mistreating prisoners of war, and wantonly destroying entire villages and religious relics not warranted by military necessity.
They have also clearly perpetrated many crimes against humanity, as their widespread and systematic jihadist military campaigns are often directed at civilian populations.

Not to mention, their actions appear congruent with the very definition of genocide: “Genocide is the systematic elimination of all or a significant part of a racial, ethnic, religious, cultural or national group.” ISIS’s mindset and actions against the Christian and Yazidi religious minorities they have captured, raped, and murdered in Iraq seem to fit squarely within this definition.

Not only is ISIS murdering these groups and forcing them from their lands, but ISIS is also destroying all historical evidence of these cultures from the regions they conquer.  If this isn’t the definition of genocide, I’m not sure what is.

Our Christian brothers and sisters, along with other religious minorities in the Middle East, face absolute destruction if ISIS’ actions go unchecked.

Representative Jeff Fortenberry (R-NE), who introduced the bipartisan resolution, made this statement about the current crisis:

Christianity in the Middle East is shattered.  The ancient faith tradition lies beaten, broken, and dying. Yet Christians in Iraq and Syria are hanging on in the face of the Islamic State’s barbarous onslaught. This is genocide. The international community must confront the scandalous silence about their plight. Christians, Yezidis, and other religious minorities have every right to remain in their ancestral homelands.

ACLJ Chief Counsel Jay Sekulow testified at a Senate hearing about the need for American leadership in protecting the persecuted Church around the world. One of his recommendations made on Capitol Hill was to recognize the brutality of ISIS for what it is – genocide against Christians and other religious minorities.

The Daily Caller unpacks the significance of the resolution:

Under international law, a formal recognition of genocide could be a game-changer for those religious and ethnic minorities most affected by Islamic State’s abuses. It would lay the groundwork for more systematic coordination between the U.S. and international partners on behalf of Islamic State’s victims — including possible military action, humanitarian relief, and fast-track refugee processing.

It is time that world leaders formally hold ISIS accountable for their actions.  If passed, this resolution will be a significant step in that process of accountability.

At the ACLJ, we continue our work on Capitol Hill and around the world to not only raise awareness to ISIS’s genocidal reign of terror, but to urge our government to take the lead in ending this historic evil.