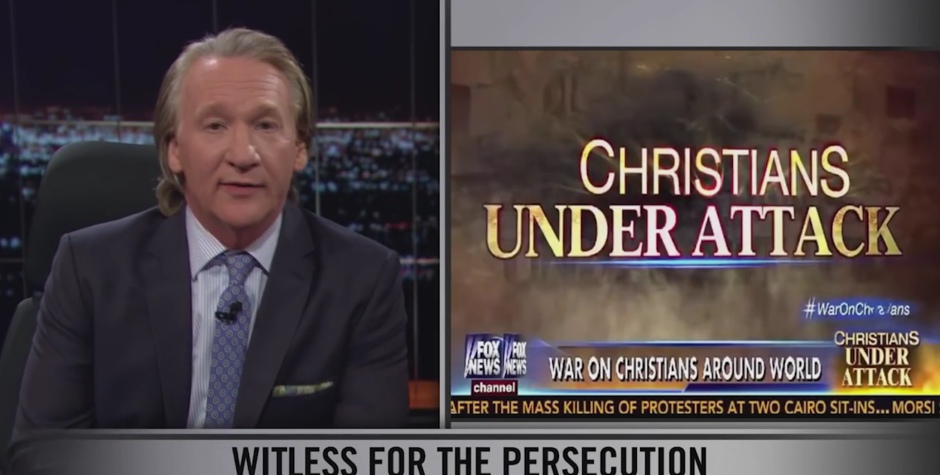 With the backdrop of a Fox News banner Reading “Christians Under Attack” and “War on Christians Around World,” Bill Maher sprays his vitriolic venom for Christians, running his own headline, “Witless for the Persecution.”

While I can take a good (even bad) joke and Maher’s (speaking of witless) attempts to get a cheap laugh while proselytizing his leftist, elitist brand of angry atheism don’t send the Christian community into a fit of rage, his hostile hypocritical vile rancor went far beyond his HBO reputation for insolence.

His most recent hit piece on Christianity aired earlier this week.  It started out as his normal atheist antics masquerading as comedy to take pot shots at faith from high atop his ivory media thrown.  But then he said this:

“Christians love to feel persecuted.  It’s part of their origin story.  But we’re a long way from them getting eaten by lions in the coliseum.”

No.  Now, they are being beheaded on beaches.  Christian children are being gunned down in Christian schools.  Peaceful Christian worshipers are being lured to fake church services to be massacred.

Christians face genocide in the world today.  Yet Maher has the unmitigated gall to insult their suffering, parody their persecution, and degrade their death.

Maher has an agenda.  He’s an angry atheist (one of the angriest).  He hates religion, but Christians most of all.  He’s a far left liberal elitist.  And he’s willing to stop at nothing to trash Christianity.

But the fact that he’s willing to use the slaughter of innocent Christians around the world as his atheist punching bag is beyond even his pale.

Instead, as Christians suffer and die, Maher laughs at their slaughter and pokes fun at their plight.

We must stand up for the persecuted.  We must share their stories.  We must take up their cause and fight for them.

Christians do face violent persecution.  Some of it is at the hands of jihadist armies in Iraq, Syria, and Nigeria.  Christians by the thousands have been forced to flee for their lives or be slaughtered.

Some of it is at the hands of jihadist regimes.  Pastors Michael and Peter face a possible death sentence for their Christian faith in Sudan.  American Pastor Saeed Abedini, beaten and tormented, is serving an 8-year prison sentence for his Christian faith in Iran.  Christian mom Asia Bibi is on death row waiting to be hanged for her religious beliefs in Pakistan.

Maher mocks.  But we can fight back.  We can and must defend these persecuted Christians.  We must be heard.

This article is crosposted on Redstate.