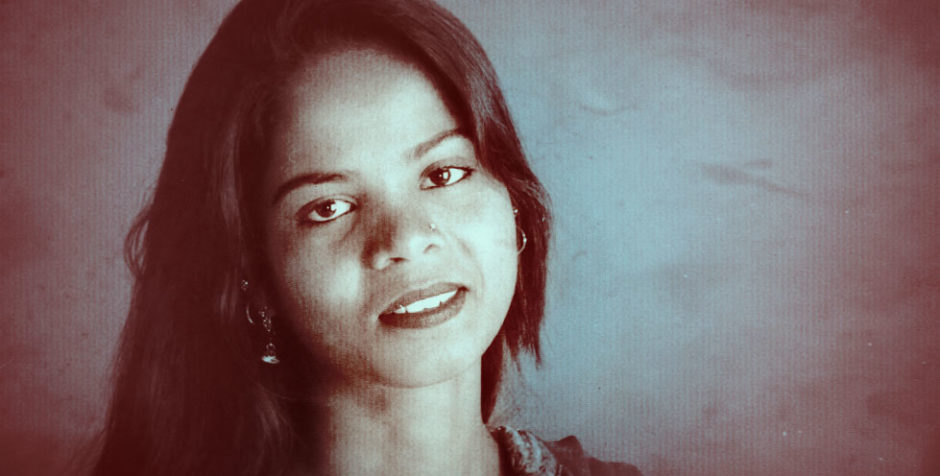 As we wait to hear the Supreme Court of Pakistan’s decision on the fate of Christian mom Asia Bibi – wrongfully sentenced to hang for her Christian faith – angry Islamist radicals are circling, demanding she be executed.

We recently told you that after years of delays, a special three-member bench of Pakistan’s Supreme Court has heard the final appeal for Asia Bibi’s life. The decision could come down at any time.

Bibi was convicted in 2010 under Pakistan’s harsh blasphemy laws.

Our legal team in Pakistan was present at the special hearing, as her attorney in Pakistan vigorously argued that her trial was fraught with errors.  Even the judges have demanded that the Prosecution produce real evidence supporting the charges against Asia Bibi.

Yet Islamic extremists aren’t interested in facts or the lack of proof.  Angry mobs are organizing on the streets in Pakistan, demanding her execution.

They’re enraged at the very possibility of this Christian’s life being spared. They’re demanding her death and threatening consequences – even against the judges – if she’s released.

"Judges' remarks have sown doubt among the party leaders and fears that she would be released soon," TLP Patron-in-Chief Pir Afzal Qadri was quoted as saying while speaking at an anti-Bibi rally in Lahore.

The patron-in-chief then read out a four-point resolution backed by party leaders that argued that allowing Bibi to go free would be an assault on not only the nation's blasphemy laws but also an attack on Islam and the national Constitution as well.

Should Bibi be released, Qadri called for the protests to continue until the justices who ensured her release face punishment "even if the central leadership is incarcerated or killed."

This is an incredibly dangerous time, not only for Asia Bibi and the justices deciding her case, but the entire Christian community.

Pakistan’s Christian community fears they will be the first target of retribution if Bibi’s life is spared. They are asking for prayer and protection.

This barbaric mob rule cannot be tolerated. Violence against Christians in Pakistan has continued to escalate at an alarming rate. It is well past time for the Pakistani government to take action and start protecting its Christian citizens.

For Asia Bibi, time is running out. Her husband recently conveyed a message from Asia while travelling in the UK, asking for prayers for her freedom.

"She told [me] that the community must remember her in their prayers because this is an international country. . . . [I] need international pressure for the release of Asia Bibi."

[Her husband Aashiq Masih] said Asia's incarceration since 2009 has spelled nine years of "suffering" for the whole family.

He went on to say: "She always has said that Jesus is her life and she is living in the name of Jesus, and [trusting] that Jesus will help her."

The grim situation Asia Bibi finds herself in is simply heartbreaking. Every Christian in the world should be infuriated.

We ask all ACLJ members to honor Asia Bibi’s request and pray for God’s wisdom for the justices, and that they would not bow to or be intimidated by mob rule. We also pray for mercy on Asia Bibi, and for protection for all persecuted Christians – in Pakistan and around the world.

Asia Bibi has committed no crime. She should not die simply because she is a Christian.

We will continue our constant advocacy for this Christian mother’s freedom and continue to seek international pressure on Pakistan to protect Christians and shut down any violent radicals who threaten harm.

The Pakistani Supreme Court could release its decision at any moment. Asia Bibi desperately needs you.

Sign our urgent petition before the court releases its verdict.