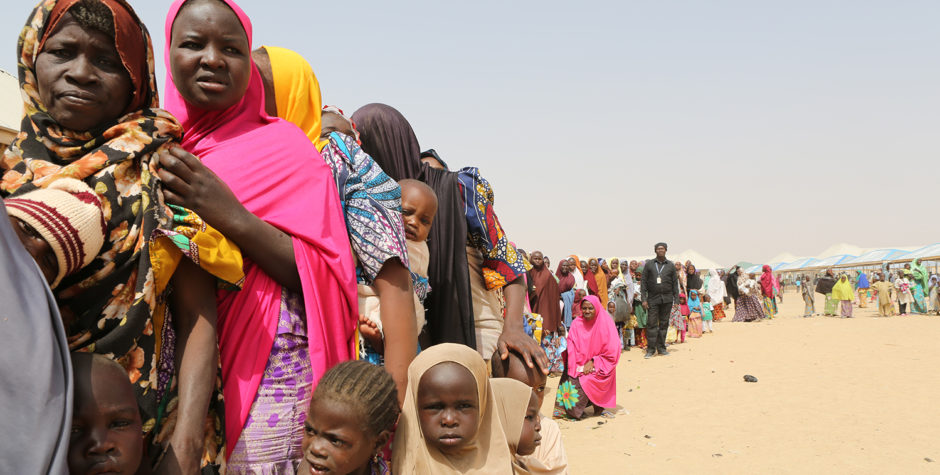 In our continuing efforts to combat genocide, this week through our international affiliate with consultative status at the U.N., the European Centre for Law and Justice (ECLJ), we sent a letter to the U.N. Special Adviser on the Prevention of Genocide, Adama Dieng. In our letter, we informed him of the dire plight of Nigeria’s Christians who are experiencing horrific atrocities at the hands of Boko Haram (a jihadist militant group) and the Fulani herdsman. We urged Mr. Dieng to act now to stop these atrocities and prevent genocide in Nigeria.

We previously sent a letter to Mr. Dieng regarding the ISIS genocide of Christians in Iraq and Syria, and urged that action be taken to hold the perpetrators accountable as well as to provide protection and assistance to the victims. Mr. Dieng responded to our letter, directly echoing our concerns and acknowledging the role the international community should play in helping the victims of genocide:

I share with you the belief that, given the acts committed by [ISIS] may constitute genocide, war crimes, and crimes against humanity, they should be examined and prosecuted by independent and competent courts. . . . In the absence of accountability processes at the national level, the international community can explore the options that you set out in your letter, some of which can also be initiated by the Government of Iraq. I have personally shared these options with the Minister of Foreign Affairs of Iraq.

As we informed you before, shortly after the ACLJ received Mr. Dieng’s letter, Iraq and the United Kingdom co-sponsored Security Council Resolution 2379, which called for a Special Adviser to be appointed in order to

support domestic efforts to hold [ISIS] (Da’esh) accountable by collecting, preserving, and storing evidence in Iraq of acts that may amount to war crimes, crimes against humanity and genocide committed by the terrorist group [ISIS] (Da’esh) in Iraq, to the highest possible standards.

Since that time, a Special Adviser has been appointed, and the Investigative Team has begun its work to hold ISIS accountable for the atrocities it has committed in Iraq.

We are encouraged by these positive steps, and are now asking Mr. Dieng to use his position to prevent genocide from occurring in Nigeria:

Today, we write to you regarding the rapidly deteriorating situation for Christians in Nigeria. Christians are increasingly the targets of religiously motivated violence, and immediate action must be taken to ensure that their plight does not rise to the level of their fellow Christians who have suffered so greatly in Iraq and Syria.

It is estimated that since May of 2011 Boko Haram has killed more than 37,500 people, displaced more than 2.4 million, and created 228,000 refugees. Boko Haram has pledged allegiance to ISIS and utilises its tactics of mass killings and kidnapping to instill fear and to intimidate. They target Christians and anyone else whom they see as a threat to the establishment of an Islamic State.

However, Boko Haram is not the only group threatening the lives of Christians in Nigeria. Increasingly we are seeing attacks being carried out by the predominately Muslim Fulani herdsman against Christian farmers.

In April of 2018, Fulani herdsman carried out an attack during Mass at a Catholic Church located in Central Nigeria. The attacks resulted in the death of two priests and 17 parishioners. Community resident Terhemen Angor described the horrific scene:

People started scampering and wailing, 19 persons, including Reverend Fathers Joseph Gor and Felix Tyolaha, who were gunned down in cold blood, while many sustained injuries, including bullet wounds. After attacking the church, the invaders descended on the community and razed over 60 houses, farmland, food barns, after carting away what people had in their barns.

As the Special Adviser to the Secretary General on the Prevention of Genocide, we have asked Mr. Dieng to:

call for all United Nations bodies to recognise that the ongoing atrocities committed by Boko Haram and the Fulani herdsman against Christians in Nigeria pose ‘a risk of genocide’ and to work immediately to put an end to the violence. Action must be taken to not only stop the spread of violence and ‘prevent . . . genocide’ against Christians within Nigeria, but also the spread of such violence throughout Sub-Saharan Africa. Boko Haram has in fact already begun carrying out attacks in neighbouring Chad and Cameroon.

that [he] work closely with the government of Nigeria to encourage Nigeria to protect the people who are most vulnerable to being attacked by preventing further attacks, prosecuting those are responsible for these brutal atrocities, and providing aid and assistance to the victims.

Genocide must indeed be prevented. And the time for action to protect Nigeria’s Christians from genocide is now. With that goal in mind, we will continue to aggressively advocate on behalf of Nigeria’s Christians who are the victims of atrocities being carried out by Boko Haram and the Fulani herdsman.

Join us now and sign our petition to protect Nigeria’s Christians now.