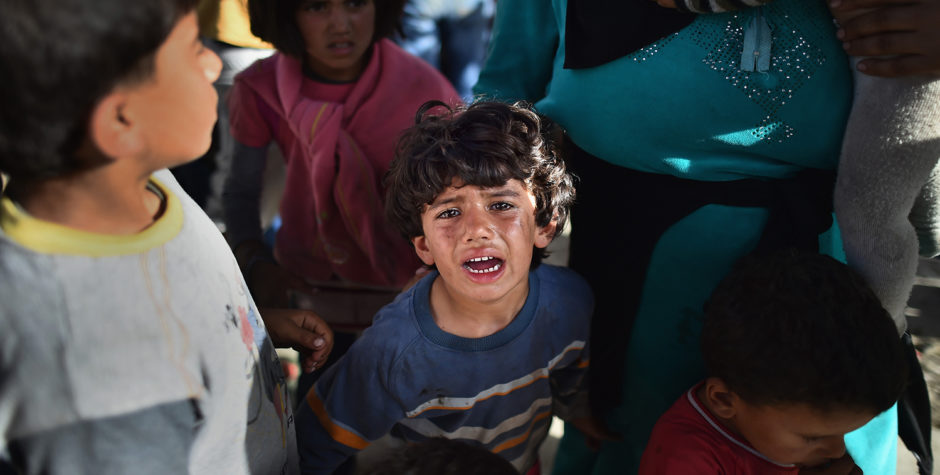 ISIS’s brutal campaign of genocide targeting Christians and other minorities wages on.

But as it suffers military defeats and loses control of territory it once controlled, it is time now, more than ever, to help the survivors begin the process of recovery and to hold its followers accountable in international courts of law.

This week the ACLJ continued advocating for the international community to follow through on its commitments and obligations to do just that.

In 2016, the European Parliament unanimously passed a resolution “on the systematic mass murder of religious minorities by the so-called ‘ISIS/Daesh.’”

This week, the ACLJ – through its European affiliate, the European Centre for Law and Justice (ECLJ) – sent a letter and a legal memorandum to His Excellency, Donald Tusk, President of the European Council, to thank the E.U. for its recognition of the ongoing genocide against Christians and other religious minorities.

But we also pressed the E.U. to take its strong stance to the next level – and to use its influence to pressure the U.N. into meaningful action as well.

In our letter we urged the President of the European Council

to call for Member States to recognise and declare that the ongoing atrocities committed by the Islamic State and associated groups constitute genocide and that Christians are among those victimised thereby, and vocalise your support for a referral by the U.N. Security Council to the International Criminal Court or the establishment of a competent tribunal in order to investigate violations by the Islamic State committed in Iraq, Syria and elsewhere in the region against Christians, Yazidis and other religious and ethnic minorities. We urge you to communicate with Member States to pressure the United Nations accordingly and to mobilise the international community to take swift and decisive action.

We also shared with Mr. Tusk the ACLJ’s Seven Point Plan in our fight against the ISIS genocide, and included a detailed legal memorandum to “provid[e] legal and factual basis for why the Islamic State’s atrocities constitute genocide under international law and what steps can and should be taken to protect the victims.”

As we stated in our letter:

The momentum is building to bring justice to the victims of these genocidal atrocities. We have received, and continue to receive, direct responses from key nation-states acknowledging the need for international intervention to stop the Islamic State genocide, to help the victims, and to bring the heinous criminals to justice.

Indeed, we’ve experienced success as more and more foreign governments and U.N. officials are responding to our calls for action.  As we said last week after a significant response we received from the U.N.’s Special Adviser on the Responsibility to Protect, the statements we are receiving are

critically important, because [they] affirm[] a long-standing recommendation we have made to focus on the expeditious return of genocide victims to their homeland. A return home is both what the vast majority of victims desire and the most efficient and compassionate way to assist the maximum number of victims. We are grateful to both Mr. Simonovic and Mr. Dieng [both of whom are U.N. Special Advisors] for recognizing this important goal and for standing with us in the effort to achieve it.

A great deal of work lies ahead, as untold numbers of Christians and other religious minorities need to be restored to their rightful homes. But the growing and increasingly unified voice of the international community in support of helping these victims return home is a tremendous step in the proper direction.

It is critical that we continue to press forward in our fight against ISIS. While progress is certainly being made, the fight is far from over.  The survivors left in the wake of ISIS’s death and destruction need justice.  They also need help.

Join us as we work to engage the international community to stop the genocide and protect Christians. We can’t let up now.