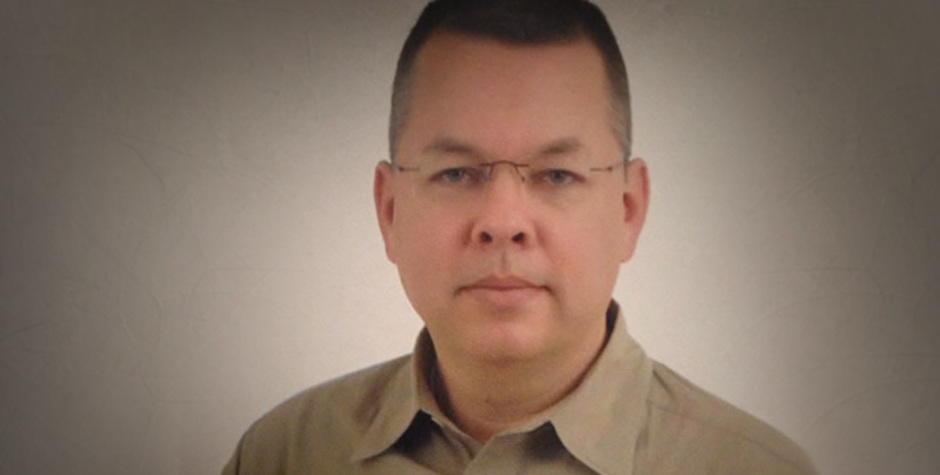 A Week of Urgent Advocacy for American Pastor Andrew Brunson

American Pastor Andrew Brunson has now spent more than 125 days wrongfully imprisoned in Turkey.  He’s spent Thanksgiving, Christmas, and his birthday locked away in a prison cell in Turkey, the only Christian among 19 prisoners confined in a 10-person cell.  Now, Pastor Andrew’s daughter has to postpone her wedding, as she waits for her dad to walk her down the aisle.

Pastor Andrew is a U.S. citizen from North Carolina facing unfounded charges after faithfully serving the people of Turkey for 23 years.

This is a major week of advocacy for Pastor Andrew Brunson.

Through our European affiliate, the European Centre for Law & Justice (ECLJ), we have submitted a written statement to the United Nations Human Rights Council (U.N. HRC) requesting their assistance in securing Pastor Andrew’s release.

Our submission to the U.N. HRC stated:

One of the hallmarks of Turkey’s proud history is the respect for all faiths. Thus, Turkey should respectfully be reminded of its continuing obligations under its constitution as well as the ICCPR [International Covenant on Civil and Political Rights] and UDHR [Universal Declaration of Human Rights] to respect and value the freedom of religion. The ECLJ urges this Council to call upon Turkey to honour its obligations. The ECLJ further requests that the U.N. make every effort to ensure that Pastor Brunson is not only treated with great care, but that he is quickly released and allowed to return home without injury or delay.

The U.N. has long stood to protect the human rights of all people. In intervening on behalf of Pastor Brunson, the U.N. will once again demonstrate its commitment to ensuring that freedom of religion exists for all people, regardless of their faith.

At the same time, Members of Congress have sent a bicameral, bipartisan letter to President Erdoğan of Turkey requesting the immediate release and return of Pastor Andrew back to the United States. 37 U.S. Senators – 28 Republicans and 9 Democrats – and 41 members of the House – 35 Republicans and 6 Democrats - signed the letter. Led by the Chairman and Ranking Member of the Senate Foreign Relations Committee and the Chairman and Ranking Member of the House Foreign Affairs Committee, the letter states:

Mr. Brunson’s imprisonment has been raised repeatedly by U.S. Government officials with officials of the Government of Turkey.  Unfortunately, high-level efforts to secure Mr. Brunson’s release have been unsuccessful.  We have closely followed developments with this case, and are deeply disappointed.

The United States and Turkey have benefited from a close partnership for decades, and we hope to be in a position to continue strengthening these ties. Now is the time for our countries to reaffirm respect for fundamental freedoms and the rule of law while reasserting our shared commitment to addressing security challenges through partnership and cooperation.

In this spirit of partnership, we respectfully ask you to consider Mr. Brunson’s case and how the recent treatment of Mr. Brunson places significant strain not only on him and his family, but also on the robust bilateral relationship between the United States and Turkey.

In coordination with the letter from Congress, the ACLJ is sending a letter to the new Secretary of State, Rex Tillerson, advocating for Pastor Andrew Brunson’s freedom and urging the Trump Administration to do everything in its power to pressure our NATO ally to do the right thing.

Our letter to Secretary Tillerson provides:

Last year, following a failed military coup, Turkey began a crackdown that has disappointingly swept up innocent religious minorities – especially Christians – in an ever-widening dragnet. Christians and other religious minorities are now increasingly the targets of detention and deportation, and are unreasonably subjected to other governmental regulation simply because of their faith. Pastor Brunson has been caught up in this dragnet. His detention appears to be related to his work as a Christian minister, making his arrest and imprisonment a violation of both Turkey’s Constitution and international agreements to which Turkey is party.

Pastor Andrew has quietly and faithfully pastored churches in Turkey for over 23 years. He has raised his family in Turkey. He has dedicated his life in service to the people of Turkey, who he loves. He has never been a member of an armed terrorist organization. He is awaiting trial, and if convicted under these false charges, could face years of imprisonment, even though his Turkish attorney cannot review his case file.

Not only has Pastor Andrew been held without any evidence being presented, his file has been sealed and his meetings with his attorney are recorded, which makes it impossible to prepare any defense. We continue to work with the State Department and our international offices to effectuate the release of Pastor Andrew.

Please help us in our efforts to secure the immediate release of Pastor Andrew - take action and amplify our work for his freedom by signing our petition.  Be heard today.