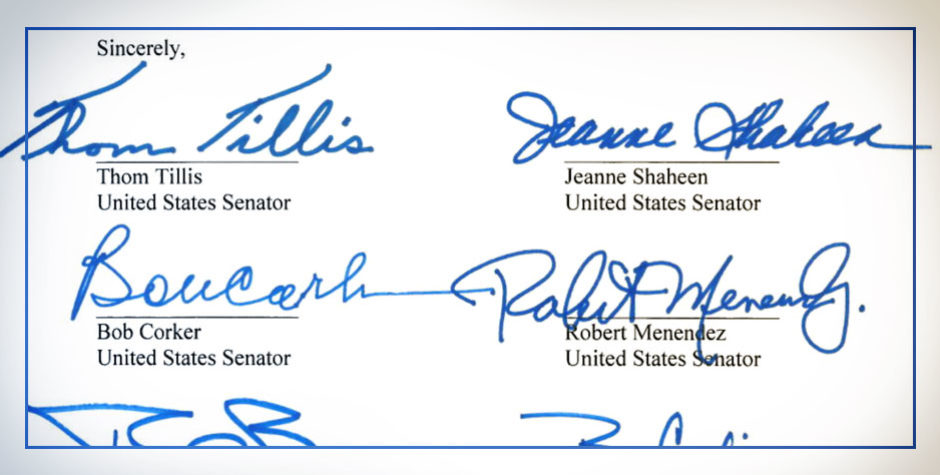 In an unprecedented show of bipartisan unity, 66 U.S. Senators – 2/3rds of the Senate – have sent a letter to Turkey’s President Erdoğan demanding the immediate release of wrongfully imprisoned American Pastor Andrew Brunson.

The Senators’ letter echoes the frustration we’re all feeling at the way our supposed NATO ally Turkey is treating an innocent U.S. citizen. They’re calling out the ridiculous indictment against him containing no real evidence and relying on hearsay from mysterious “secret witnesses.”  Their words mirror our own, that Pastor Andrew is a political prisoner, being held captive and placed on trial for his Christian faith. The letter states:

On March 13th, 2018 Turkish authorities issued an indictment alleging and purportedly detailing Pastor Brunson’s offenses.  It is an absurd collection of anonymous accusations, flights of fantasy, and random character assassination.  It is an insult not only to an unjustly imprisoned individual, but to the traditions of Turkish jurisprudence.  That a Turkish court could accept such a document as the basis for prosecution removes any shred of doubt that Andrew Brunson, like other American citizens as well as Turkish employees of the U.S. Government detained under the State of Emergency, is being used as a political pawn by elements of the Turkish government bent on destroying the longstanding partnership between two great nations.

Moreover, the suggestion in the indictment that the actions of Pastor Brunson to explain his religious convictions to others was somehow meant to undermine the Turkish state brings a new and deeply disturbing dimension to the case.  It should trouble all Turks justly proud of Turkey’s centuries-old tradition of welcoming believers of all faiths.

One Senator leading the group is Thom Tillis of North Carolina – Pastor Andrew’s home state – who was in attendance the first day of the trial. Senator Tillis witnessed the absurd proceedings, which culminated with the pastor being sent back to prison and the judges inexplicably delaying the trial until May 7th.

The Senators concluded their letter warning Turkey of potential consequences for this mistreatment of our citizen, if he’s not allowed to come home to his family:

The United States Government, and millions of Americans deeply concerned by the Brunson case, have been patient, in the hope that justice would be done and Pastor Brunson would be reunited with his family.  The signatories of this letter have concluded that other measures will be necessary to ensure that the Government of Turkey respects the right of law-abiding citizens and employees of the United States to travel to, reside in, and work in Turkey without fear of persecution.

These next three weeks are critical. The ACLJ is directly involved in Pastor Andrew’s legal defense. We’re redoubling our efforts on Capitol Hill and at the U.N., and asking the entire world to put maximum pressure on Turkey.

We are gratified to see so many Senators taking unified action for this innocent U.S. citizen being held hostage for his Christian faith. It is our hope that President Erdoğan will finally accept the serious nature of Pastor Andrew’s case, how it could affect Turkey’s relationship with the U.S., and make the correct decision to send him home.

The 66 Senators who signed the letter are as follows:

Pastor Andrew needs YOU to act with them.