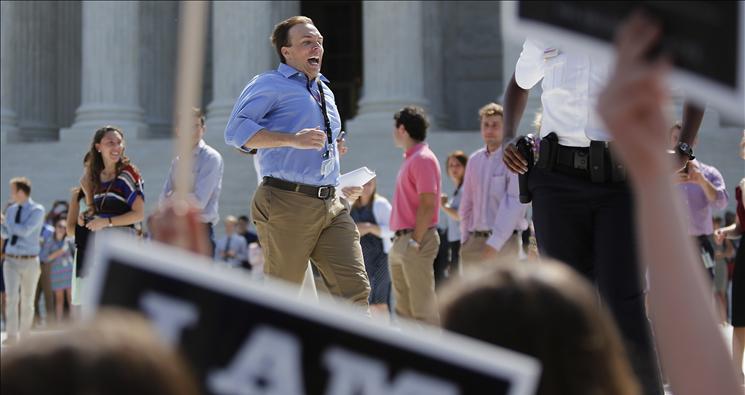 In The Wake Of Hobby Lobby

In The Wake Of Hobby Lobby

In the wake of yesterday’s blockbuster Hobby Lobby decision striking down the HHS Mandate, today the Supreme Court granted our petition for review in the case of Gilardi, v. HHS, and denied the government’s petition in our case of Korte v. HHS.  In Gilardi, the Court vacated the decision of the D.C. Circuit Court of Appeals (see report of decision here) and sent the case back to the lower court to apply the Hobby Lobby decision to the facts of the Gilardi case.  In Korte, the Court’s action today leaves in place the resounding victory we achieved at the Seventh Circuit (see report of decision here.)

Now that the ripples from the Supreme Court swamping of the U.S.S. Kathleen Sebelius (who wisely abandoned ship some time ago) are already having their effect, it is fitting to review and pay tribute to those courageous families whom we at the ACLJ have had the honor to represent throughout this fight.

Before there was a Hobby Lobby case, St. Louis businessman, Frank O’Brien, Jr., was the first for-profit company owner to challenge the Obama administration’s attack on religious freedom.  O’Brien’s case was dismissed at the district court level, we got a temporary injunction from the Eighth Circuit Court of Appeals, we argued the appeal last October, and have been waiting for a decision ever since.  Today, we were able to formally advise the Eighth Circuit that the Supreme Court’s Hobby Lobby decision requires a victorious outcome for O’Brien. We anticipate a favorable decision from the Eighth Circuit shortly.

O’Brien, about as fair and generous an employer as one could ever hope to work for, has said this about the Mandate, in words that sum up what all of our clients have been thinking: “I don’t want to know what my employees do in the privacy of their bedrooms; but when I’m forced to pay for what they do there, I am brought into their bedroom.”  O’Brien’s never tried to keep his employees from doing what they want with their paychecks. He just doesn’t want the government dragooning him and his family – in violation of their beliefs - into paying for other people’s “lifestyle choices.”

Then there’s Chris and Paul Griesedieck, owners of American Pulverizer, Inc., a century-plus year old company their German immigrant great-grandfather started. The Griesediecks and their fight for liberty were featured in World magazine.  Their case has been on hold awaiting the outcome of the appeal of the O’Brien case.  Now that the Hobby Lobby domino has fallen, O’Brien will soon fall, and the Griesediecks too will be able to get permanent protection of their religious liberty.

The same ripple effect from Hobby Lobby will secure the liberty of the Bick family, the Hartenbowers, the Lindsays, and, of course, the Kortes and Gilardis, all of whose stories we presented to the Supreme Court in the amicus brief we filed in Hobby Lobby.  These hard working Americans will no longer have to face the ruination of the businesses they and their families have spent — in some cases —  several lifetimes building up.

But the ripple effect is not limited to our clients or the dozens of other family entrepreneurs who filed legal challenges to the Mandate.  Nor is it limited to the Obama administration’s misguided — and now thoroughly discredited — HHS mandate.  As we’ve argued from the beginning, on behalf of Frank O’Brien and all the other families it has been our privilege to represent, what was at stake here was nothing less than the right of all Americans to conduct their businesses in a way that gives glory to God, not to Leviathan.

Hobby Lobby’s victory is a victory for all of us.