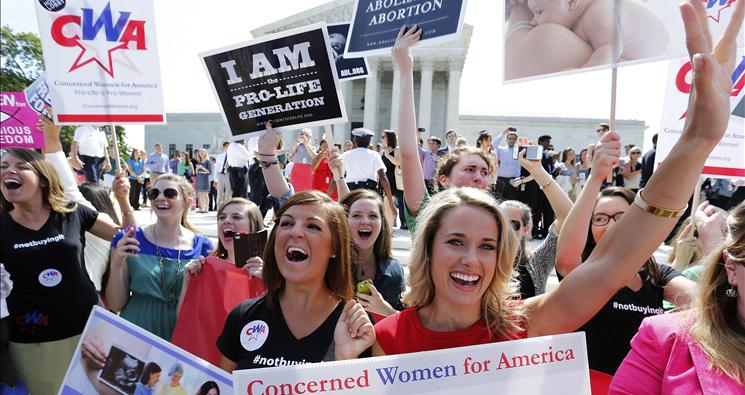 Moments ago, the Supreme Court of the United States announced its decision in Burwell v. Hobby Lobby Stores, Inc.  The result?

As we will show, Congress provided protection for people like the Hahns and Greens by employing a familiar legal fiction: It included corporations within RFRA’s definition of “persons.” But it is important to keep in mind that the purpose of this fiction is to provide protection for human beings. A corporation is simply a form of organization used by human beings to achieve desired ends.

Next, the Court stated that it has “little trouble” concluding that the abortion-pill mandate “substantially burdened” Hobby Lobby’s exercise of religion. This meant that the Obama Administration could only prevail if it could show that its mandate was the “least restrictive means” of advancing a “compelling government interest.”

The Obama Administration could not meet that heavy burden.

So it lost. Decisively.

What does this mean? It means that the Obama Administration cannot trample the rights of business owners at will, treating them merely as extensions of the federal government. Business owners enjoy fundamental liberties, and that common sense conclusion will have wide-ranging ramifications for liberty.

The decision is also a clear defeat for the abortion lobby and its radical White House allies. Hobby Lobby and – by extension – all of our ACLJ clients cannot be drafted into directly subsidizing abortion on demand.

We filed a key amicus brief in this case where we asserted the very arguments the Court adopted today. In addition, we have two cases before the Supreme Court on this same issue, have filed seven challenges to the abortion-pill Mandate (prevailing in all of them) and have filed more than a dozen amicus briefs nationwide. In other words, we launched a years-long effort to defeat the Mandate and are grateful for this outstanding result.

The Obama Administration has suffered a stinging defeat. And that means liberty won.

And – most important of all – lives will be saved.