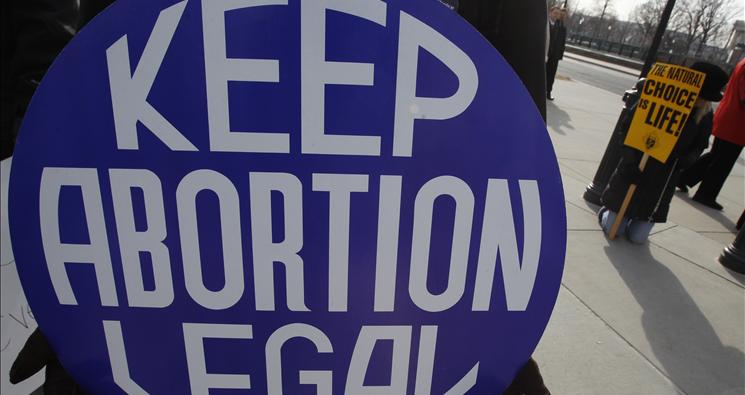 Over the past few years, numerous states have followed the will of the people to increase protections for women and unborn children by enacting reasonable, commonsense restrictions on abortion.

These pro-life laws are aimed at limiting unregulated and dangerous abortions and ensuring that unborn children are given even a fighting chance at life.  They are focused on cutting through the cloud of distortion perpetuated by the Culture of Death.

Pro-abortion radicals on the other hand have been trying to challenge these laws in the courts and the court of public opinion to no avail.  Now they are attempting to eviscerate these pro-life laws with one piece of federal pro-abortion legislation, S.B. 1696.

The stated purposed of this extremist pro-abortion legislation is to “put an end to these restrictions.”  It specifically states that it would apply to all laws or regulations enacted before or after this bill passed at any level of government.  In other words, it would put an end to pro-life laws at both the federal and state levels.

Proponents of this legislation testified today before the Senate Judiciary Committee that this bill would strike down over 200 pro-life laws.  200 pro-life laws is a conservative estimate.  When looking at the specific provisions of this law it could nearly eviscerate all pro-life laws around the country – laws that are saving the lives of mothers and babies alike.

If passed, this new measure would give legal cover to deadly abortionists like Kermit Gosnell.  Gosnell was convicted of monstrously murdering babies born alive after botched abortions and contributing to the death of women through his unsanitary and dangerous moneymaking abortion “practice”.

Under the deceptive cloak of “Women’s Health Protection,” this legislation would do anything but.  As my ACLJ colleague David French so aptly noted, this legislation should be more appropriately named “The Kermit Gosnell Enabling Act of 2014.”

Each provision of this proposed legislation is an abortion lobbyist’s dream and opens up a Pandora’s Box of deadly pro-abortion public policy, giving abortionists an endless ability to challenge any restriction on their cash-cow industry.  Make no mistake.  This bill has little to do with women and everything to do with protecting abortionists and the abortion industry while undercutting nearly every pro-life gain made across the nation in recent years.

This bill is chock-full of pro-abortion code words and euphemisms to hide its true intent but has enough legal teeth to do real damage in court.  It deserves to be unpacked line by line in plain English.

It literally lists a plethora of pro-life laws (both federal and state) that would be categorically deemed “unlawful” if this legislation passed.

Banning any regulation of abortion by “telemedicine,” literally phoning it in, is supposed to protect women’s health?  That’s asinine.

Yet this laundry list of specific laws is not the heart of the bill.  The bill’s nuclear provision would eviscerate nearly every remaining pro-life law regarding abortion on the books at the federal, state, or local level.

The law would make essentially any restriction on abortion illegal if it “singles out abortion services” or makes “abortion services more difficult to access.”  In other words, if a law lists abortion among things to be regulated or even if it doesn’t mention it but the language of the law could somehow be construed to limit abortion, that law would be stricken from the books.

As if that wasn’t broad enough, the law goes on to provide an unbelievably expansive definition of what it means to make abortion “more difficult to access.”  Any regulation of abortion would be considered making it “more difficult to access,” and thus an unlawful restriction, if it: A) “interferes” with how the individual abortionist feels is best to commit the abortion (not generally accepted medical practice, but that abortionist’s own subjective opinion); B) causes any “delay” in obtaining the abortion (not excessive delay, any delay); C) could potentially “increase” the cost of abortion or require “travel, childcare, or time off work”; D) might require extra office visits; E) could lead to the closing of any abortion clinics in the State; F) imposes abortion related criminal or civil penalties (i.e. any laws aimed at making what Gosnell did killing babies born alive after botched abortions illegal would be unlawful); OR G) makes abortion “more difficult to access,” not just by itself, but as a “cumulative impact” when “combined” with other regulations.

If these overly broad and near categorical ban on any limitations whatsoever on abortions weren’t enough for the pro-abortion proponents of the bill, there are a few more specific targets of this legislation.  It would make unlawful: 1) any ban on abortion, for any reason, prior to “fetal viability” (as determined by the individual abortionist committing the abortion, not an objective medical definition); 2) any ban post viability when, in the opinion of the individual abortionist committing the abortion (not generally accepted medical opinion, but the opinion of that abortionist), it would effect the life or “health” of the mother, including psychological health (i.e. abortion code for any reason whatsoever); 3) any “restriction” that would limit the ability to obtain an “immediate abortion” when the particular abortionist committing the abortion feels it would pose a risk to the “health” of the mother to wait (again “health” meaning any reason whatsoever); OR 4) any restriction on sex selection, race selection, or other forms of discriminatory abortions.

A note on “health” exceptions: this phrase is commonly used by pro-abortion proponents not as one might naturally think of as health, physical health, but as a massively vague and expansive definition of health including psychological health, essentially allowing doctors to claim that if the woman would be sad or not like the way her body feels during a pregnancy that that would constitute a “health” issue.  Further, the determination of “health” is left to the subjective whim of each individual abortionist and not a matter of accepted medical opinion.  Thus, there would basically be no limit on abortion that could withstand scrutiny.

According to the bill’s own language the only abortion related laws in the county not impacted by this legislation are “laws regulating physical access to clinic entrances, requirements for parental consent or notification before a minor may obtain an abortion, insurance coverage of abortion, or [the federal ban on partial-birth abortion].”  But the bill goes on to specifically state that “Congress should address [these] through separate legislation.”

In an attempt to mitigate negative reaction to this radical measure, proponents of this legislation may attempt to point to language in the bill allowing restrictions of abortion if they are similar to those imposed on other “medically comparable procedures.”  Yet, the abortion industry has essentially cordoned off abortion from every other regulated area of medicine, claiming that it is different than other procedures.  It’s a misnomer; there is no similar medical procedure – no other medical procedure that terminates life.  Despite this language, the bill would clearly ban all pro-life laws that require abortion clinics to comply with regulations of surgical medical centers.  This then becomes an essentially meaningless phrase by the plain meaning of the rest of the bill.

Finally, the only exception or defense that could save any of these pro-life laws is to prove by “clear and convincing evidence” (an unbelievably high legal standard) that the law “significantly advances” the safety of abortion or women’s health and that that advance cannot be achieved by a less restrictive means, giving abortion on demand without apology the highest protected status in constitutional law – a fundamental right – something that even the most liberal interpretation of Roe v. Wade does not achieve.  While the proponents of this measure claim they are merely codifying the Supreme Court’s decisions regarding limitations on abortion, this is nothing but a boldfaced lie.

The Supreme Court in Roe itself stated:

We repeat, however, that the State does have an important and legitimate interest in preserving and protecting the health of the pregnant woman, whether she be a resident of the State or a nonresident who seeks medical consultation and treatment there, and that it has still another important and legitimate interest in protecting the potentiality of human life. These interests are separate and distinct. Each grows in substantiality as the woman approaches term and, at a point during pregnancy, each becomes “compelling.”

This legislation ignores and would obliterate the “another important and legitimate interest in protecting the potentiality of human life” language as if it never existed, drastically altering the current state of abortion jurisprudence and ushering in a brave new world of unregulated abortion practice in America.

This is dangerous, deceptive, and deadly.

This disastrous bill should have no chance of passing Congress.  Even the pro-abortion U.S. Senate knows better than to try something this extreme.  If and when this receives a vote in the Senate, we’ll be watching to see which members, especially those who claim to be pro-life or at least not pro-abortion, vote for this radical advancement of the Culture of Death.

They will be held accountable to America’s pro-life majority.