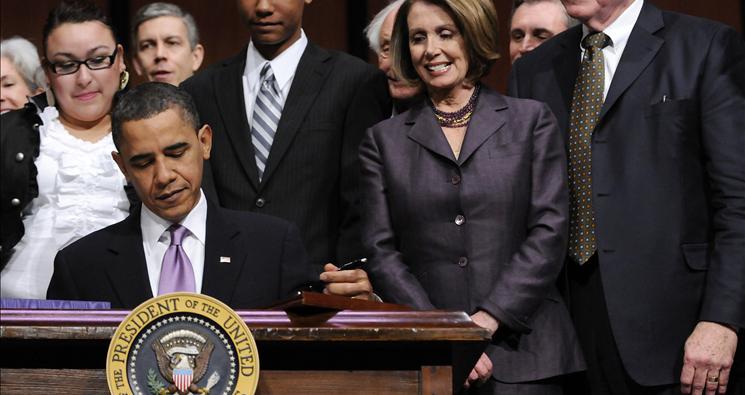 It's an argument we have made before. This time to a three-judge panel of the U.S. Court of Appeals for the District of Columbia Circuit. We argued that the individual mandate, which forces Americans to purchase health insurance, violates the Commerce Clause of the Constitution.

We asked the appeals court to reinstate our lawsuit and declare the individual mandate unconstitutional.

Our legal team did a superb job with this appeal. Senior Counsel Edward White presented oral arguments before the panel and contended that the individual mandate exceeds the constitutional authority granted to Congress and violates the Commerce Clause.

During the hearing today, there was aggressive questioning from the panel, which raised several areas of concern about the constitutionality of the individual mandate - questions about the powers of Congress. If the Commerce Clause gives Congress the authority to mandate the purchase of health insurance, the appeals court asked the government, where does Congressional authority end?

As Judge Brett Kavanaugh put it: "In 220 years there has been a whole lot of laws and a lot of crises, yet Congress has never once mandated a purchase."

Our argument in court was very clear: both the Constitution and Supreme Court precedent point to the fact that the health care law oversteps the authority of Congress.

As you'll recall, we have been involved in this issue from the very start. In fact, months before today's hearing, we presented our argument about the individual mandate in a brief filed with the appeals court:

"The individual mandate is unconstitutional because it exceeds even the outermost bounds of Congress’s Article I authority and is inconsistent with the constitutional system of dual sovereignty that divides power between the federal and State governments," the brief contends. "Under the Commerce Clause, Congress cannot 'regulate' inactivity by requiring individuals to buy a good or service as a condition of their lawful residence in the United States. . . ."

We were encouraged that the judges engaged the very issues we raised about the constitutional problems with ObamaCare. And, we’re hopeful that the appeals court will act on behalf of our clients and millions of Americans who understand that ObamaCare is not only a bad health care law, but one that is unconstitutional as well.

When the appeals court issues its decision, we will let you know.