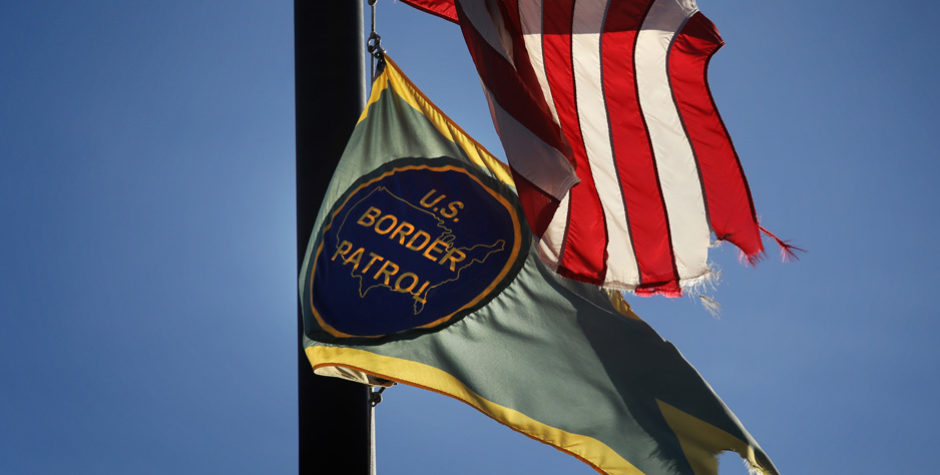 Who would have thought just a few short years ago that both Democrats and Republicans, who saw securing our southern border as an important issue and a point of agreement between the two parties, would be in a political battle over the matter?  As the President and GOP members of Congress call for immigration reform, enforcing existing laws, and building a wall to secure the border with Mexico—leaders in the Democrat Party accuse them of bigotry and a lack of compassion.

“All Americans, not only in the States most heavily affected but in every place in this country, are rightly disturbed by the large numbers of illegal aliens entering our country.  The jobs they hold might otherwise be held by citizens or legal immigrants. The public service they use impose burdens on our taxpayers.

That's why our administration has moved aggressively to secure our borders more by hiring a record number of new border guards, by deporting twice as many criminal aliens as ever before, by cracking down on illegal hiring, by barring welfare benefits to illegal aliens.”

The Secure Fence Act of 2006 which was passed by a Republican Congress and signed by President George W. Bush, authorized about 700 miles of fencing along certain stretches of land between the border of the United States and Mexico.  The act also authorized the use of more vehicle barriers, checkpoints and lighting to curb illegal immigration, and the use of advanced technology such as satellites and unmanned aerial vehicles.

At the time the act was being considered, Barack Obama, Hillary Clinton, and Chuck Schumer were all members of the Senate. (Schumer of New York is now the Senate minority leader.) Obama, Clinton, Schumer and 23 other Democratic senators voted in favor of the act when it passed in the Senate by a vote of 80 to 19.

In a 2009 speech, Senator Chuck Schumer stated, “The American people are fundamentally pro-legal immigration and anti-illegal immigration. We will only pass comprehensive reform when we recognize this fundamental concept.”  In 2013, House Minority Leader Nancy Pelosi (D-CA) urged the House to support a bill that upheld the “Basic Principle” of “secur[ing] our borders.”

The examples of Democrats who called for tougher security at the border are virtually limitless.  Now many of these same politicians call for open borders, voting rights for those here illegally, and the abolition of Immigration and Customs Enforcement (ICE). This agency was formed after the horrific events of 9-11 due to the very real threat of terrorists using our porous borders and lax visa controls to launch further attacks on America. Those who call for sensible border security and allowing those who apply to come here legally to be at the front of the line are frequently branded as heartless xenophobes who lack compassion and common decency.

So, let’s consider the compassion aspect of this political debate. For compassion is at the heart of many people calling for stronger border security.  There is a moral issue at stake that makes a porous border the epidemy of a lack of compassion.  Let’s talk about common decency, for there is an indecent element to open borders.

For the moment, lay aside the arguments concerning immigration reform, the plight of those fleeing violence or extreme poverty in their own countries, or whether ICE should be aggressive in enforcing existing laws.  Momentarily, let’s not even consider how weak borders might impact national security.  As horrible as it is, for the sake of argument, let’s suspend the discussions about how the drug cartels use our southern border for the illegal drug trade that shatters lives and kills hundreds—if not thousands—in the U.S. every year.

While those issues are important and must be taken into consideration, there is one other issue that should focus the attention and touch the hearts of our political leaders of all stripes as we consider border security: human trafficking.  It is a scourge and a human travesty that is often overlooked and under-reported.  On a daily basis, human smugglers bring people—many of them teenagers—across the border to be exploited in either sexual trafficking or forced labor, often in agriculture and industry. Of the approximate 12,000 young people recently identified as being separated from their parents at the U.S./Mexico border, over 10,000 of them crossed the border without parents, many of them in the hands of human traffickers.

Human trafficking is defined as “the recruitment, transportation, transfer, harboring or receipt of persons, by means of threat or use of force or other forms of coercion, of abduction, of fraud, of deception, of the abuse of power over those in a position of vulnerability. . . .  [T]his exploitation includes prostitution or other forms of sexual exploitation, forced labor or services that includes slavery, or practices similar to slavery.”  It generates an estimated $150 billion dollars in revenue worldwide; sexual human trafficking alone is a $9.8 billion dollar business in the United States.  There have been almost 9,000 sex trafficking cases reported in the United States this year.  Victims can be of any age, gender, nationality or race.  The National Human Trafficking Resource Center estimates that more than 75% of the victims are in the sex trade. Many of them are children and teens, most often girls.

This should be the issue that unites Democrats and Republicans, indeed all Americans, on the matter of having a secure border.  With the border as vast as it is, the only way to truly impact human trafficking at our border is by having a wall or some similar type of barrier.  As expensive as it is, and as politically volatile, having a barricade combined with video and electronic monitoring, is the only practical way to reduce the horrifying and inhuman phenomenon of human traffickers bringing their victims to the United States.

To turn a blind eye to this spectacle is immoral.  To obfuscate and use a secure border as a political weapon should shock the conscience of every American. Will a truly secure border be expensive?  Absolutely.  Is it worth the cost?  Hearing their stories, and looking into the faces, of those who are exploited and brought here either against their will or under false pretenses makes the answer: Absolutely yes.

We must do everything in our power to stop the evil that is human trafficking.  Denying human smugglers easy access to the United States at our southern border is the first and most basic strategy to accomplish this.