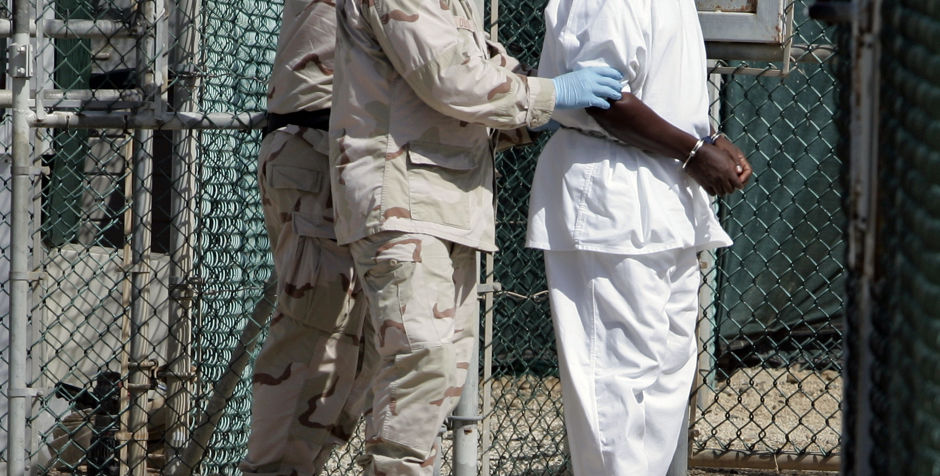 President Obama is relentless in his pursuit of legacy, throwing caution (and our national security) to the wind.  Tomorrow his reckless Administration is set to release 10 more “hardcore” terrorist enemy combatants from Gitmo – the prison at Guantanamo Bay.

The U.S. military is preparing a bulk transfer of 10 detainees on Thursday from its detention center at Guantanamo Bay, Cuba, two defense officials told Fox News.

The transfer, amounting to about 10 percent of the remaining prisoners, marks the largest group of detainees to be shipped out of the camp since Defense Secretary Ash Carter informed Congress in December his department would transfer a wave of detainees at the beginning of 2016. . . .

But the moves have heightened security concerns, as some of the latest detainees being shipped out were deemed medium- or high-risk prisoners.  “All these guys are the ‘hardcore’ type; if not, they would have been transferred earlier,” said one official familiar with the list of those being transferred Thursday. . . . Right, now, there are 103 detainees remaining at the camp, and all have ties to Al Qaeda or other terrorist groups.

The security threats are escalated by the astounding recidivism rate of released Gitmo terrorists.  Of the dozens of lower level terrorist detainees already released, 1 in 3 of these jihadist terrorists have ended up back on the battlefield.

For example, just last month Ibrahim al-Qosi, a former top bin Laden aid who was released three years ago after spending a decade at Gitmo, was discovered to have become a senior leader of al Qaeda in the Arabian Peninsula.

Releasing these battle-hardened terrorists only to have them plot and kill again is a dereliction of President Obama’s sworn duty to protect America.

Yet in last night’s State of the Union address, he doubled down on his disastrous campaign promise to close Gitmo by the end of his presidency, stating: “I will keep working to shut down the prison at Guantanamo. It is expensive, it is unnecessary, and it only serves as a recruitment brochure for our enemies.”

When 1 in 3 of those terrorists have already proven to return to the battlefield – including in senior leadership positions – how could releasing these enemy combatants and closing a detention facility in the middle of a war – and make no mistake, we are at war – be anything but pure absurdity?

President Obama blames Gitmo for recruiting terrorists, but let’s take a look at just a few of the high level terrorists already released in the last few days:

Muhammed Abd Al Rahman Awn Al-Shamrani, a member of Al Qaeda, was released from the U.S. detention facility at Guantanamo Bay, Cuba, to the Saudi Arabian government, the Department of Defense announced Monday. . . .

Al-Shamrani, who authorities said was a recruiter and fighter for Al Qaeda, was sent back to his homeland after 14 years of confinement. . . . A profile of him released by the Pentagon in 2014 said he "almost certainly" remained committed to Islamic extremism.

[Al Kandari] was assessed to be a committed member of Al Qaeda who served as adviser and confidant to 9/11 mastermind Osama Bin Laden, according to U.S. officials. Al Kandari has many connections to senior Al Qaeda members and was an influential religious figure for Al Qaeda fighters in Afghanistan. He also provided ideological education to trainees of the terrorist network at the al-Faruq Training Camp and the Islamic Institute in Kandahar. . . .

In 2008, he was assessed to be a "high risk" to the U.S., its interests and allies, according to the Defense Department.

Like Al Kandari, Atef -- a Yemeni detainee transferred to Ghana last week -- was considered "high risk" in 2008. U.S. officials said Atef, who is 35 or 36 years old, was a fighter for Bin Laden's former 55th Arab Brigade and an admitted member of the Taliban.

Gitmo was built to house the worst of the worst.  When released these jihadist terrorists return to what they know.  It is their mission to kill Americans, terrorize the West, and institute their radical Islamic caliphate on the world.

They will kill again.  Closing Gitmo would be the largest security disaster of President Obama’s tenure in office.  And he’s closer than ever to accomplishing this deadly debacle, with less than 100 Gitmo detainees remaining after tomorrow’s planned release.

A key element to all this is that, despite the protestations of the left about indefinite detention, international law allows enemy combatants to be detained until the conflict is over. Period. There is no legal requirement to release anyone from Gitmo. And, the pursuit of a President’s legacy is too weak a reed to build a national security policy on.

Terrorism is a cancer, and you can’t compromise with cancer. Either you get the cancer, or the cancer gets you.

At the ACLJ, we’re committed to defeating this cancer and ensuring it doesn’t spread.  Join our petition as we work in Congress to stop President Obama from closing Gitmo and releasing dozens of deadly terrorists.