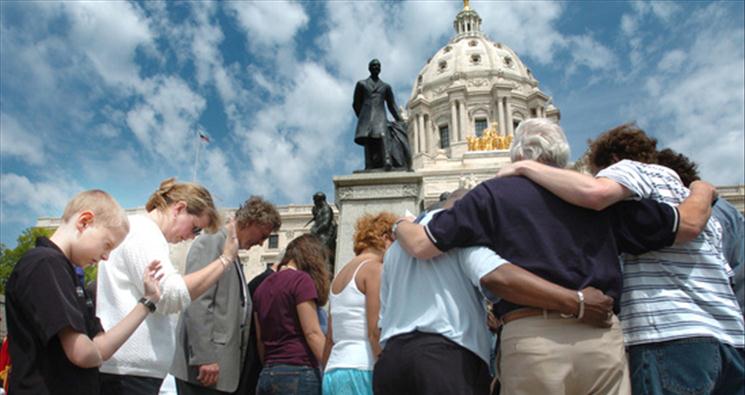 It's an outcome we're delighted with and a decision that truly reflects an important victory for our nation and its heritage and history.

Today, a three-judge panel of the U.S. Court of Appeals for the Seventh Circuit upheld the constitutionality of the presidential proclamation for the National Day of Prayer, overturning a lower court decision that declared the proclamation unconstitutional.

We filed a critical amicus brief in the case - representing nearly 70 members of Congress - and urging the appeals court to take the action it did - overturned the federal district court decision and determined that the Freedom From Religion Foundation (FFRF), which brought the lawsuit, lacked legal standing in the case.

We're extremely pleased that the appeals court rejected a flawed decision and determined that while some may disagree with a presidential proclamation, they do not have the right to silence the speech they don't agree with.  The appeals court correctly concluded that the plaintiffs lacked standing to challenge the National Day of Prayer.

In a decision issued today by the U.S. Court of Appeals for the Seventh Circuit, the Court's Chief Judge Frank Easterbrook rejected an argument by the Freedom From Religion Foundation that they could bring a federal lawsuit because the National Day of Prayer made them feel excluded and unwelcome.  Echoing an argument made by the ACLJ in its amicus brief, the court concluded: "Hurt feelings differ from legal injury," and all plaintiffs ultimately allege is "disagreement with the President's action."  The decision is posted here.  Our analysis of the decision is posted here.

Our amicus brief contended that there are key Supreme Court decisions that point to the constitutionality of this Day of Prayer.  The ACLJ cited the 1983 decision in Marsh v. Chambers by the Supreme Court.  The brief argued:  "The historical record establishes that the National Day of Prayer 'is deeply embedded in the history and tradition of this country.' 463 U.S. at 786.  If calls for national prayer did not violate the Establishment Clause during the founding era, Marsh requires the conclusion that the National Day of Prayer is constitutional today."  Our amicus brief is posted here.

We represented 67 members of the 111th Congress (Republican and Democrat) - including Rep. Randy Forbes of Virginia, who worked with us to line-up Congressional support, and who serves as co-chairman of the Congressional Prayer Caucus.

Here's a list of the 67 members of Congress represented in the brief:

We also represented the ACLJ's Committee to Protect the National Day of Prayer, which consisted of concerned Americans who support the Day of Prayer.

Today's decision upholding the constitutionality of the National Day of Prayer represents a victory for our nation's heritage and history - protecting a long-standing tradition that's been a part of our country for centuries.