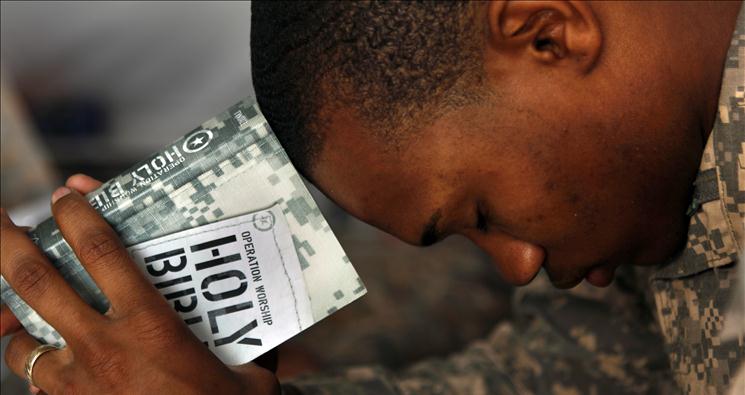 Anti-Christian Proselytizing in the Military

The president of the deceptively named Military Religious Freedom Foundation (MRFF), Mikey Weinstein, is at it again, taking his anti-Christian crusade once more to the U.S. Military.

A week ago, he wrote a letter to the Air Force Academy demanding that the words “so help me God” be stricken from the cadet Honor Code.  He claims that the phrase violates the Constitution as an establishment of religion and the imposition of a religious test to hold office.

What his assertions clearly ignore is the long history and tradition of this phrase throughout American public and military service.  President George Washington himself added the phrase to the Presidential Oath of Office, and it is in fact part of the actual oath of enlistment for the Air Force.

The fact is no one is forced to say the phrase or denied the ability to serve in the military for refusing to say it.

The ACLJ recently wrote the new Superintendent of the Air Force Academy, Lieutenant General Michelle D. Johnson, a letter explaining the constitutionality of the Academy’s use of the phrase “so help me God”:

First, no cadet is compelled to recite the phrase, and failure to recite the phrase results in no penalty. Second, the phrase establishes no religion. In fact, the phrase is no more onerous to the Constitutional rights of Air Force Academy cadets than is the phrase, "In God We Trust," on the currency they receive in payment for their military service. From the very beginning, this has been an artificial crisis wholly contrived by individuals in the MRFF who are hostile or hypersensitive to any and every example of religious expression in the military (no matter what the source of such expression).

The letter goes on to point out the unrelentingly anti-Christian agenda of MRFF.  For example, in one Op-Ed he wrote recently, Weinstein referred to Christians in the U.S. armed forces as “monsters who terrorize” and other derogatory terms nearly 50 times.  On other occasions he has compared Christian members of the military to the Taliban and al Qaeda.

This is nothing more than an ongoing, calculated effort to proselytize atheism and anti-Christian propaganda in the military at the expense of religious freedom.

As our letter concluded:

Mr. Weinstein's numerous, erroneous demands invite extreme caution on the part of all those who are targets of his periodic tirades and who receive his periodic letters, lest the recipients become unwitting pawns in Mr. Weinstein's strategy to eviscerate religious freedom in the Armed Forces. . . .

In this matter, the mere presence of the phrase "so help me God" in the Honor Code does not violate the Constitution and laws of the United States. As such, Air Force Academy officials must absolutely reject Mr. Weinstein's imagined Constitutional violation.

Nearly 100,000 Americans have signed our petition defending religious freedom in the military against these outrageous anti-Christian attacks.  Sign the Petition to Protect Religious Freedom in the Military today.