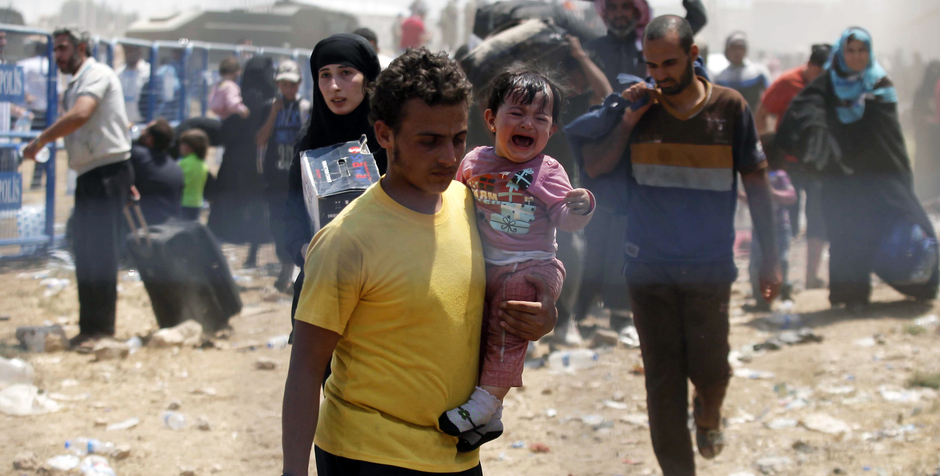 Waking Up In An Increasingly Troubled World

Waking Up In An Increasingly Troubled World

In this season heralding the Prince of Peace as Christians celebrate Christmas, it seems the words of the Biblical Prophet Jeremiah are more apropos: “They cry Peace, Peace, when there is no peace.”  We all awoke this morning in an increasingly troubled world.

In Syria, literally hundreds of thousands have lost their lives in the last five years as the civil war rages on.  And the heartbreak and carnage is not over; actually it is worse.  Russian and Syrian warplanes and artillery continue to target the civilian population.  Militias backed by Iran and Syria are going from door to door in the besieged city of Aleppo summarily executing men and teenage boys, while women are raped in front of their children.  International observers called it a “Mass Human Atrocity.”

Events in Syria directly impact the fight against ISIS.  Syrian Rebel groups, encouraged to revolt against President Assad and initially trained and armed by the United States, feel abandoned by Western powers and many may now align themselves with ISIS and other jihadists as they are forced to retreat. The Center for Religion and Geo-Politics estimates that sixty percent of the Syrian rebels have an ideology similar to the jihadists. In the last week, ISIS forces recaptured the city of Palmyra, its adjacent oil and gas fields and captured the T-4 Russian airbase T from the anti-ISIS coalition. This week, two hundred more U.S. Special Operations troops are being deployed to Syria.

In Iraq, the battle to retake Mosul from ISIS has bogged down to a crawl.  ISIS is launching effective counterattacks in numerous places.  Meanwhile, Iran continues to assert its influence in Iraq and promotes the division in that country between Shi’a and Sunni Muslims.  Each accuses the other of atrocities and the largely Sunni population of Mosul looks warily on their Shi’a “rescuers” from Iran and Baghdad. It seems President Obama’s proclamation of success in Iraq as he withdrew all American forces—claiming combat operations were over—was more than a bit premature.

In Afghanistan the Taliban continues to reclaim large amounts of territory and the Afghan Unity Government, plagued by division and corruption, seems incapable of securing its major population centers.  Also, ISIS now has a foothold in Afghanistan and is launching terrorist attacks, along with Al Qaeda and the Haqqani network of terrorists from neighboring Pakistan.  Fourteen U.S. service members have been killed in Afghanistan in the last 8 weeks.

North Korea continues to advance its intercontinental ballistic technology with impunity, hoping to eventually mount one of its nuclear weapons on a missile with the capability of striking the western United States.

Iran, flush with cash from an ill-advised nuclear agreement with the Obama Administration, continues to also test long-range missiles in violation of the agreement and U.N. Security Council resolutions.  Iran also has increased its financial and logistical support of terrorism and has enabled Hezbollah to send two brigades of fighters to assist in the carnage around Aleppo, Syria.

China continues to flex its military muscle in the South China Sea, claiming and militarizing land in international waters.  In spite of entreaties from the United States, China refuses to try and reign in its ally to the south, North Korea.  On December 16, China seized a U.S. Navy underwater drone in international waters – an act of piracy under Maritime Law – only now just agreeing to return it to the U.S.

Russia continues to be a key player in the destabilizing actions in Syria, participating in the indiscriminate bombing of schools, hospitals and other civilian facilities in Aleppo.  No wonder that the U.S. Ambassador to the United Nations, Samantha Power, has labeled both Vladimir Putin and Syria’s Assad as war criminals.  They are more than that: they are heartless and inhumane despots.

The failure of the civilized world to stop the violence and atrocities in Syria is a mystery.  Had he followed the advice of his senior leaders, including then-Secretary of State Hillary Clinton, in 2012 and closed Syrian airspace and created safe zones for Syrian refugees under this no-fly zone, most believe President Obama could have demonstrated U.S. leadership and much of the violence and atrocities could have been avoided, with minimal risks to the lives of U.S. military personnel.  Russia was not even a player in this conflict at the time.  Now with Russian military actively participating with Assad attacking his own people, that course of action is virtually lost, as an attempt to take such actions now would lead to American and Russian aircraft battling it out over the skies of Syria.  President Obama analyzed and pondered events in Syria until he lost viable options.  The National Review quotes senior Obama Administration officials as stating that the President is “insufferably indecisive.”

Lest we forget, Russian troops are still amassed along the border with Ukraine.  Ukraine, whose admission to NATO is pending and whose cries for heavy defensive weapons from the United States have been ignored, has finally begun producing its own surface to air/surface to surface missiles.  It is keenly aware of the looming threat from the Russian Bear and still smarts from the loss of the Crimea to Russia.  Russia’s response to Ukraine’s attempts at self-defense?  This week Russia threatened to invade Ukraine, under the guise of defending Crimea.

Russia’s bullying of not only Ukraine, but its Eastern European neighbors, has caught the attention of NATO.  An armored brigade and another battalion will deploy in the coming days from Fort Carson, Colorado.  Their destination is Poland.

What is the answer to these gut-wrenching events and looming threats?  In a world plagued by war, violence, and injustice, is there an answer?  Moral courage comes to mind.  The civilized world must choose difficult, and sometimes costly, right actions against easy wrong actions, or taking no actions at all.  And the United States must reassess its role in global affairs.  Nature is not the only thing that abhors a vacuum.  When America does not lead—reassuring our friends and putting our foes on notice—malevolent forces will fill in that gap.  The incoming Administration is inheriting a troubled and chaotic geopolitical landscape.  There are no easy answers.  However, there is no good answer that does not include bold and principled American leadership.

Pondering all of this, I was reminded of a Christmas hymn composed by Henry Wadsworth Longfellow:

I heard the bells on Christmas Day their old, familiar carols play,
And wild and sweet, The words repeat
Of peace on earth, good-will to men!

Then from each black, accursed mouth the cannon thundered in the South,
And with the sound, the carols drowned
Of peace on earth, good-will to men!

It was as if an earthquake rent the hearth-stones of a continent,
And made forlorn the households born
Of peace on earth, good-will to men!

Then pealed the bells more loud and deep: "God is not dead; nor doth he sleep!
The Wrong shall fail; The Right prevail,
With peace on earth, good-will to men!"

It is a Christmas wish.  It is also a reminder of the foundations of our faith and those of American freedom.  Pray for those whose lives are wounded by war this season.  And pray for our leaders, including those about to begin their duties in January.  More than ever, it is time to set aside our differences.  We must be a nation united.  For, indeed, we are all in this together.