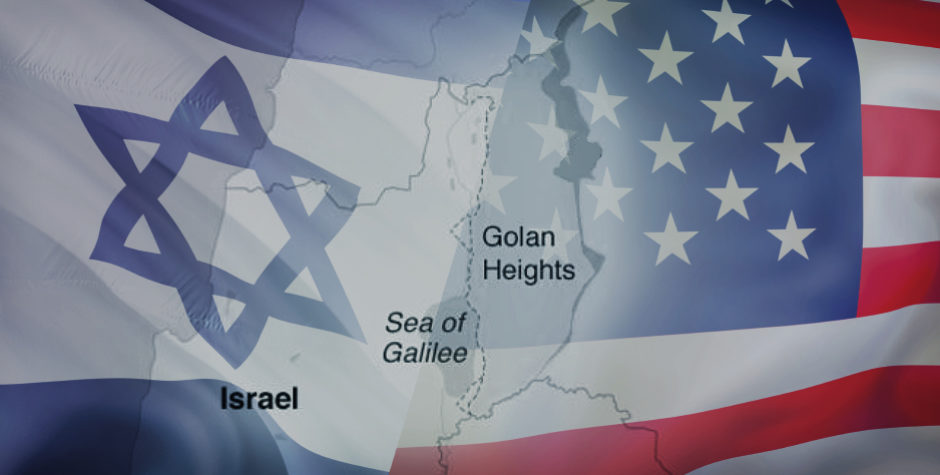 Israel’s Sovereignty Over the Golan Heights Is Correct

The significance of the relationship between the United States and Israel cannot be overstated.  With so much of the world, including frequently the various bodies in the United Nations, adopting resolutions and policies against Israel, the commitment of the United States to guarantee the security of the Jewish State has never been more important.

Israel is not only the only democracy in the Middle East; it is also the only country where religion, race, gender, ethnicity, or sexual orientation is a non-issue when it comes to individual rights and equal protection under the law.  In spite of the false accusations and biased reporting concerning this chief ally of America, Israel is the only country in the area where true individual freedom is guaranteed.  Unlike many of its neighbors over the decades, Israel has never been the aggressor; all of Israel’s wars have been wars of self-defense.

Last week President Trump signed a Presidential Proclamation recognizing the Golan Heights as a part of Israel.  The Golan Heights is a large plateau that sits along the border with Syria and has been occupied by Israeli Defense Forces (IDF) since 1967 when Israel was (once again) attacked by its neighbors.  This area of land is vital to the country’s security.

Much has changed since that six-day war fifty-two years ago.  Jordan and Egypt maintain a peaceful and cooperative relationship with Israel and quietly work with the Israelis as to peace and security in the wider region.  Even Saudi Arabia and some of the Arab Gulf States have realized that the threat to peace in the region is not Israel, but rather Iran and the various terror organizations in the area, all of them trained and armed by Iran.  As this oppressive theocracy is the chief threat militarily and politically to its Arab neighbors, nations in the Middle East quietly work with Israel to counter the malevolent actions and influence of Iran in the region.

Which is why the Golan Heights is so important and why President Trump’s Proclamation is so significant.  In what has to be the epidemy of hypocrisy and lack of shame, Russia was among the members of the United Nations Security Council who condemned our President’s order and rejected what they deem the “annexing” of the Golan Heights by Israel – this from a country which illegally annexed the Crimea and has unlawfully occupied parts of Ukraine and the former Soviet Republic of Georgia.

However, the thought of giving the Golan back to Syria and the Assad regime would be disastrous for Israel.  It would be politically naïve.  Strategically and militarily it would be dangerous and foolish.  Syria used the Golan Heights to shell Israel from 1948 to 1967. Israel giving up this security buffer would be tantamount to rewarding Syria for attacking Israel in 1967 and again in 1973.  It would also change the cost-benefit analysis of other belligerent nations who would attack their neighbors.  There must be risks and consequences when one country blatantly starts an unjustified war with a country on its border.

Recognizing the Golan Heights as a part of Israel is accepting reality:  Israel has occupied the land since the 1967 war and Syria lost its right to the area in question as a consequence of its unprovoked attack on its neighbor.

Those who would destroy Israel and wipe it from the face of the earth are still with us.  Recognizing Israeli sovereignty over the Golan Heights sends a clear message to the Assad regime.  It was Syria who used the Golan Heights to target Israeli civilians.  It is Syria’s Assad who has attacked his own civilians, with more than 500,000 Syrians killed in its civil war.  Under Assad, chemical weapons and barrel bombs have been launched against his own people.

In his attempts to remain in power, Assad has welcomed the support and assistance of Iran.  Iran now has what is likely a permanent presence in Syria, including plans to establish a military base in southern Syria, not far from Israel.  Iran has repeatedly vowed that their ultimate goal is the destruction of the Jewish state.   Iran continues to arm and train Hezbollah, a terror group sitting just outside the Golan Heights, with thousands of missiles and rockets trained on the nation of Israel.  These missiles now have a sophisticated guidance system supplied by Iran.

Last week, Egyptian and Hamas officials acknowledged that the three rockets initially launched from the Gaza Strip into Israel were fired on the orders of Iran.  These facts alone are indeed enough to justify that the Golan Heights are now a permanent part of Israeli territory.  The presence of Iran in Syria, and its command and control relationship with Hamas and Hezbollah, has opened a whole new front in the war against Israel.

If it were left to many of the countries in the U.N., Hamas and Hezbollah could attack Israel with impunity.  In any other international circumstance, attacking another country with rockets and missiles would be considered an act of war.  Yet, Israel lives with this life-threatening reality on a regular basis.  Air raid sirens and bomb shelters are a part of life in Israel. When Israel strikes back in self-defense, it is often Israel which is condemned amid threats to bring the nation before the International Criminal Court.  Rarely does the U.N., General Assembly condemn the attacks against Israel.  This is not right.  This is unjust.  This is immoral.

The United States stands with Israel.  This commitment must never waver.