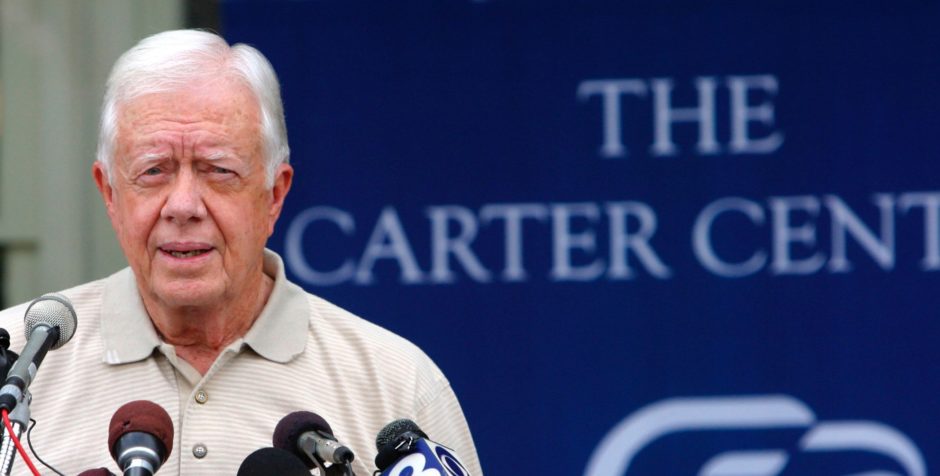 Every year, the United States government gives money to charities that do work around the world giving aid to those who need it most. Unfortunately, however, one of the pitfalls of this kind of generosity is that sometimes the money can end up in unexpected places, and if it falls into the wrong hands can be used for causes that otherwise go against our nation’s interests.

Investigations from other groups and sources have exposed a very troubling set of circumstances: over the last several years the Carter Center—President Jimmy Carter’s non-profit in Atlanta—may have been diverting some of its funds to provide “material support or resources” to Palestinian terrorist groups like Hamas. In doing so, the Carter Center has not only gone against American interests, but has also very possibly violated federal laws that criminalize the provision of “material support or resources” to such organizations.

18 U. S. C. §2339B makes it a federal crime to “knowingly provid[e] material support or resources to a foreign terrorist organization.” The Supreme Court has recently made clear that this goes far beyond providing cash with the intent of directly funding terrorist activities. It criminalizes nearly any support or resources given to a terrorist organization for any purpose, including “‘training’ and ‘expert advice or assistance’” for purportedly humanitarian reasons.

On the outside, the Carter Center has pushed for reconciliation between Israel and the Palestinian people, with the proposed outcome of a two-state solution. However, as recent history and other evidence has shown, the Carter Center – including through its office In Ramallah – consistently exhibits preferential treatment towards Palestinian organizations and groups, to the point of detriment toward the State of Israel. Perceived anti-Israel statements on the part of President Carter have even led many of his long-time advisors to stop their work with him and publicly denounce his actions.

We at the ACLJ maintain that anyone is allowed to think and say what they want, and that free speech is part of what makes a democracy work. But when that speech turns into actual harmful conduct – and especially when U.S. tax dollars are concerned – then the government needs to step in. From 2015 to 2016 alone, the Carter Center took in more than $306 million, including significant contributions from the United States Agency for International Development (USAID).

The Carter Center has also been open about the fact that that it maintains close contacts with both Fatah and Hamas, two key organizations within Palestinian circles. While Fatah has made some attempts to legitimize its efforts, there is no question that in the eyes of many governments—including the U.S. government—that Hamas is a terrorist organization and that any aid rendered to them is aid rendered to terrorism.  Therefore, the haphazard manner in which the Carter Center supports these groups cannot be allowed to continue. Nor can we continue to allow our tax dollars to be funneled to efforts that provide “material support or resources” to terrorists.

In our effort to discover the truth and protect American interests abroad, the ACLJ has filed a Freedom of Information Act (FOIA) request with the federal government to obtain all records and correspondents involving the Carter Center and any funding they may have purposefully or accidentally provided to Hamas and other terrorist organizations.

We are concerned that the Obama State Department was ensuring the Carter Center was getting U.S. tax dollars, and that it has continued to this day through the deep state bureaucracy, while turning a blind eye to the Carter Center’s open ties with terrorist organizations and sympathizers in potential violation of U.S. law.

With the millions of dollars that the Carter Center takes—through either private donations or contributions from the U.S. government—it is quite likely that some portion of it has found its way to supporting terrorist activities against America’s leading ally in the Middle East, Israel.