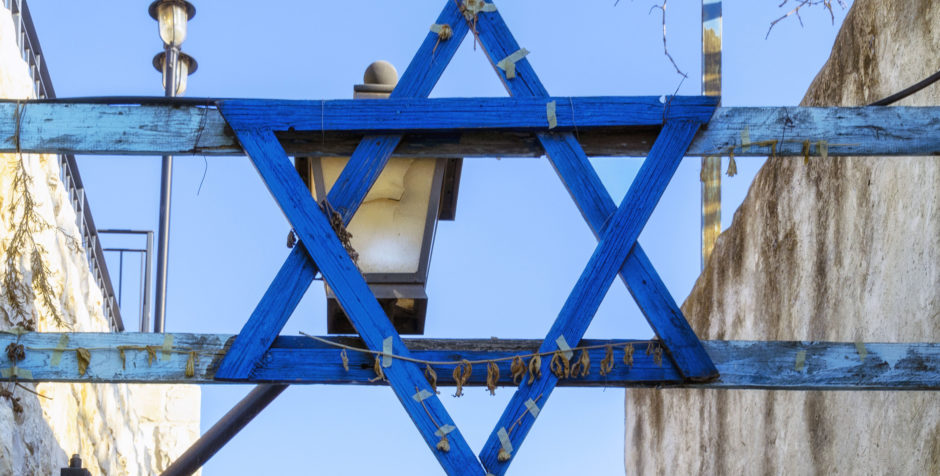 Vile anti-Semitism is on the rise in America. It shouldn’t be surprising when our leaders in Washington spew anti-Israel, anti-Jewish sentiment without repercussions.

A recent report revealed that 60% of the hate crimes committed in New York City alone targeted Jewish people. And that’s just through June.

About 60 percent of the hate crimes in New York City this year have targeted Jews, according to figures recorded by the New York Police Department.

The statistics show that there were 184 hate crimes in the city through June 2—an increase of 64 percent from last year—and that 110 of this year's incidents targeted Jews, NBC News reported.

Last year, Jews were the victims of 58 attacks out of 112 total.

It’s shocking that in a city that claims to be so liberal, innocent lives are deemed unworthy of protection. After all, New York is the city that recently lit up the spire of Freedom Tower to celebrate new legislation that allows babies to be killed all the way up to the moment of birth.

But it’s not just New York. Anti-Semitic attacks are increasing across the country. According to a release from the Anti-Defamation League, 2018 was the third-highest year of violence against Jews in decades.

The U.S. Jewish community experienced near-historic levels of anti-Semitism in 2018, including a doubling of anti-Semitic assaults and the single deadliest attack against the Jewish community in American history, according to new data from ADL (the Anti-Defamation League) issued today. ADL’s annual Audit of Anti-Semitic incidents recorded a total of 1,879 attacks against Jews and Jewish institutions across the country in 2018, the third-highest year on record since ADL started tracking such data in the 1970s.

As we’ve noted before:

[A]ccording to a recent report by the FBI, the majority of religiously motivated hate crimes in the United States were committed against Jewish people – and this despite Jews making up less than 2% of the population. In fact, since the FBI began reporting these statistics in 1993, there has not been a single year in which Jewish people were not the victims of the majority of religiously motivated hate crimes.

What are the odds that trend will reverse in 2019? It was less than 2 months ago that a young man entered a California synagogue with an assault rifle and opened fire, murdering one woman and injuring the Rabbi and others on the last day of Passover.

That terrible attack came just six months after another gunman entered a Pittsburg synagogue with a gun and senselessly killed 11 members and wounded 6 more.

What can we really expect when our own U.S. Representatives feel comfortable casting hateful anti-Semitic slurs? We told you how Rep. Ilhan Omar tweeted that Jewish group AIPAC was “All about the Benjamins,” implying the anti-Semitic trope that Jews use money to control lawmakers. In 2012, Omar tweeted: “Israel has hypnotized the world, may Allah awaken the people and help them see the evil doings of Israel.”

She just got around to deleting that tweet this past February.

And recently, we told you how Omar’s main defender and fellow Congresswoman Rashida Tlaib appeared on a podcast and revealed her disturbing feelings about the Holocaust.

Rep. Tlaib claimed her words were being taken out of context. What other possible context could there be? Six-million Jews were mercilessly slaughtered during the Holocaust. Exactly what about that is calming?

Even the mainstream media is spreading anti-Semitic tropes. We reported on an offensive, anti-Semitic New York Times cartoon that showed a caricature of a “blind” President Trump being led by a dog with the face of Israeli Prime Minister Benjamin Netanyahu and wearing a Star of David hanging from its collar.

It’s not just here. It’s happening around the globe. Anti-Semitic attacks rose a reported 13% worldwide in 2018.  A recent study by the European Jewish Congress (EJC) revealed a grim reality for Jews around the world:

Dr. Moshe Kantor, president of the EJC, said the situation could be best summed up as an “increasing sense of emergency among Jews in many countries around the world.”

Antisemitism around the world, he said Wednesday, “has recently progressed to the point of calling into question the very continuation of Jewish life in many parts of the world. As we saw with the second mass shooting of a synagogue in the US, many parts of the world that were previously regarded as safe no longer are.”

The study noted that in France, violent antisemitic incidents rose 74% over 2017, while they rose 59% in Australia and 60% in Italy. The study indicated that most of the cases are vandalism (56%), while 23% are threats and 14% are weaponless attacks.

Prof. Dina Porat, head of the Kantor Center at Tel Aviv University, said that while their statistics include events of 2018, the situation in 2019 is equally worrying.

This shocking trend cannot continue. We are demanding that Speaker Nancy Pelosi and her leadership team stand against anti-Semitism and remove Rep. Omar and Rep. Tlaib from committees where they hold an elevated platform to influence — including matters directly impacting Israel.

It’s up to us to fight back against anti-Semitism and send a message to the rest of the world. Take action with us, and demand Reps. Omar and Tlaib be removed from their committees and be censured for their disgusting, anti-Semitic rhetoric.