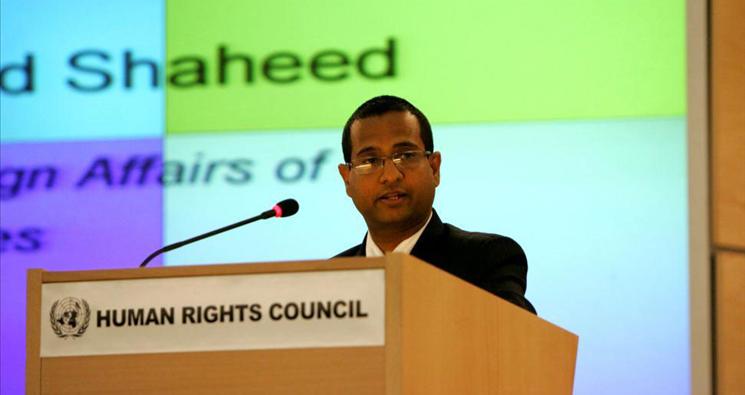 Presenting his interim report to the committee, Mr. Shaheed expressed his concern over Iran’s repeated violations of human rights, and he specifically cited the country’s judicial system for its complicity. He cited the Judiciary for practices of torture, cruel or degrading treatment of detainees, and the impositions of the death penalty without necessary safeguards. Furthermore, Mr. Shaheed identified that the Iranian Judiciary denied alleged criminals access to legal counsel and medical treatment, and he highlighted Iran’s “widespread use of secret and public executions.” Mr. Shaheed acknowledged that Iran carries out “[s]ecret group executions inside prisons, which regularly occur in alarmingly high numbers, [and] are often carried out without the knowledge and presence of family and lawyers.”

“In some cases, elements of Iran’s penal code and legal practices amount to contravention of those international laws it acceded to,” said Mr. Shaheed. In his speech to the General Assembly, Mr. Shaheed called upon Tehran to release the individuals listed in his interim report, including Pastor Youcef. Mr. Shaheed also mentioned that he had been informed that Iran has arrested and prosecuted lawyers for their attempts to provide legal counsel to those in need. Like Pastor Youcef’s lawyer, Mohammad Ali Dadkhah who has been sentenced to 9 years imprisonment, most lawyers are charged with acting against national security, insulting the Supreme Leader, and spreading propaganda against the regime.

Among the most striking findings in the report:

The Special Rapporteur is also concerned by reports of targeted violence and discrimination against minority groups. Members of recognized and unrecognized religious and ethnic minorities such as Arabs, Azeris, Balochs, Kurds, Nematullahi Sufi Muslims, Sunnis, Baha'is and Christians are reportedly facing a wide range of human and civil rights violations.

The report specifically highlights the plight of Pastor Youcef:

The Special Rapporteur was particularly disturbed by a recent ruling of the Supreme Court that upheld a death sentence for Yousef Nadarkhani, a Protestant pastor who was reportedly born to Muslim parents but converted to Christianity when he was 19 years old. The verdict reads that, unless he decides to renounce his Christianity, Mr. Nadarkahni will be executed by hanging.

We applaud the Special Rapporteur for his report and ask for his continued involvement in Pastor Youcef’s case. We hope that Mr. Shaheed’s comments and finding will spur further action by the international community, which can no longer remain silent about Iran’s abuses.

10.21.2011 Update: Iran’s state-funded media has immediately attacked the U.N. Report, calling it “unacceptable and invalid,” and accusing the U.S. of attempting to “manipulate the international community with fabricated and misleading misinformation.” One Iranian official “question[ed] the reputation of the [UN] Human Rights Committee,” and another official stated that Mr. Shaheed, who is a devout Muslim, “is indebted to the Zionist regime” and that the report itself was spurned by “international Zionism.”

Iran's Deputy Ambassador to the U.N. actually stated that Tehran had "expressed its readiness to provide all the necessary information to the Special Rapporteur to prepare a fair, balanced, nonpolitical, substantiated and well documented report." However, in July, the Iranian Government announced that the U.N.’s Special Rapporteur was not permitted to even enter the country. It is clear that Iran remains committed to spreading lies and distortions in an effort to cover up their blatant human rights violations.