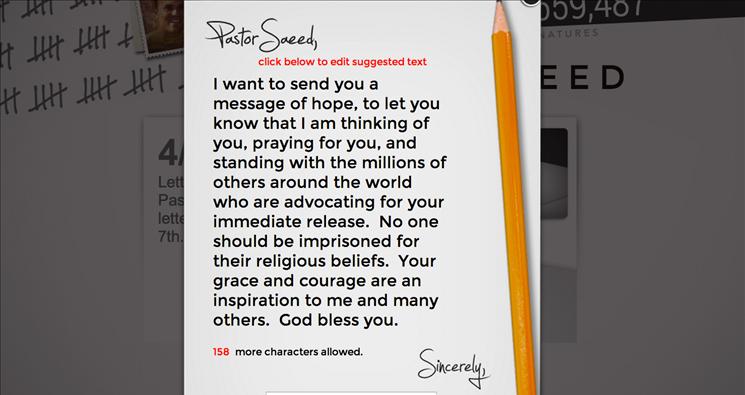 Thousands Send a Message: Pastor Saeed is Not Forgotten

While Pastor Saeed Abedini continues to be refused medical care (after transporting him to a hospital for a few hours, Iranian authorities claimed there was no doctor available and sent him back to Evin Prison yesterday), he has not been forgotten by throngs of supporters around the world.

In just 24 hours after launching our campaign urging people around the world to write letters directly to Pastor Saeed, well over 15,000 people have already submitted their letters at SaveSaeed.org.  This latest public advocacy campaign is quickly becoming one of the largest letter writing efforts for an imprisoned Christian.

The idea is simple: encourage Pastor Saeed and let the Iranian authorities know that the world is watching, waiting for it to release this persecuted pastor.

We know these letter writing campaigns can have a tremendous effect.  As Maryam and Marziyeh, two women who were imprisoned in Evin for their Christian faith, told Jordan Sekulow on our daily radio program today and explained in their new book Captive in Iran, these letters really do make a difference.

If you have not already done so, send Pastor Saeed a letter of encouragement for his birthday.  On May 7th, he will be 33 years old, but unfortunately he may be forced to celebrate that special day in prison - in Iran - apart from his wife and kids.

The process is simple; write a short letter using our online form letting Pastor Saeed know you are thinking and praying for him.  We have also provided you suggested language that you can send:

Pastor Saeed,
I want to send you a message of hope, to let you know that I am thinking of you, praying for you, and standing with the millions of others around the world who are advocating for your immediate release.  No one should be imprisoned for their religious beliefs.  Your grace and courage are an inspiration to me and many others.  God bless you.
Sincerely,
[Your Name]

It is that easy, and we will take care of sending the letters to Pastor Saeed.

As tens of thousands of people send Pastor Saeed these letter (and we are receiving more letters every minute), the pressure increases on Iran.  Let Pastor Saeed know he is not forgotten.  Write him a letter today, and share this critical tool with your friends.  Go to SaveSaeed.org and click on the “Write Saeed a letter” tab.