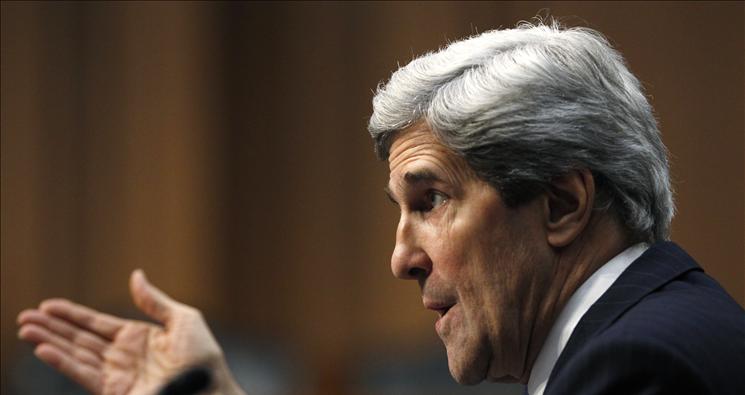 One day after the State Department’s first proactive call for American Pastor Saeed Abedini’s release at the United Nations, Secretary of State John Kerry has released his first public statement urging that Pastor Saeed – a U.S. citizen –  be “immediately released.”

We welcome this first sign of engagement from Secretary Kerry and are eager to work alongside the State Department in fighting for the freedom of this U.S. citizen whose only “crime” is his Christian faith.

On Monday, after the State Department’s refusal to appear before the Tom Lantos Human Rights Commission of the U.S. House of Representatives last week, I appeared on Fox News and called upon the State Department, and specifically Secretary Kerry, to make a statement by today.  Secretary Kerry’s statement does just that and is a tremendous step forward in our government’s involvement in securing Pastor Saeed’s freedom.

I am deeply concerned about the fate of U.S. citizen Saeed Abedini, who has been detained for nearly six months and was sentenced to eight years in prison in Iran on charges related to his religious beliefs. I am disturbed by reports that Mr. Abedini has suffered physical and psychological abuse in prison, and that his condition has become increasingly dire. Such mistreatment violates international norms as well as Iran’s own laws.

I am also troubled by the lack of due process in Mr. Abedini’s case and Iran’s continued refusal to allow consular access by Swiss authorities, the U.S. protecting power in Iran. I welcome reports that Mr. Abedini was examined by a physician and expect Iranian authorities to honor their commitment to allow Mr. Abedini to receive treatment for these injuries from a specialist outside the prison. The best outcome for Mr. Abedini is that he be immediately released.

We're very pleased that Secretary of State Kerry made this bold and public statement calling on Iran to release Pastor Saeed.  By speaking out directly on behalf of Pastor Saeed, Secretary Kerry is taking our government’s most aggressive action yet in working to secure the freedom of this U.S. citizen. We also appreciate Secretary Kerry calling attention to Pastor Saeed’s worsening health. By becoming directly involved in this case, the U.S. sends a powerful message to Iran and our allies – our government will not stand by and abandon one of our own. By engaging Pastor Saeed’s case at the highest level, we’re hopeful that the State Department will now do everything in its power to secure the release of this U.S. citizen.

I am very encouraged by Secretary Kerry's statement demanding Saeed's immediate release.  I am very happy to read that although Secretary Kerry has asked for medical treatment for Saeed, he does not stop there, and states that the best outcome is Saeed's immediate release. I hope to see more proactive actions from our government. Saeed and I are both proud to be Americans. I am hopeful that this will put more pressure on the Iranian government to act and free Saeed so he can return to our family in the United States.

We are also hopeful that this statement is a public sign of increased engagement from the State Department.  Pastor Saeed’s freedom must be a top priority of the U.S. government.

The voice of nearly 550,000 people worldwide is being heard and is now being echoed by the top diplomat of the United States.  Pressure works.

Now the focus turns to Iran.  The world is watching.  Iran must honor its promises, its international obligations, and the human rights of this U.S. citizen.  Iran must free Pastor Saeed.