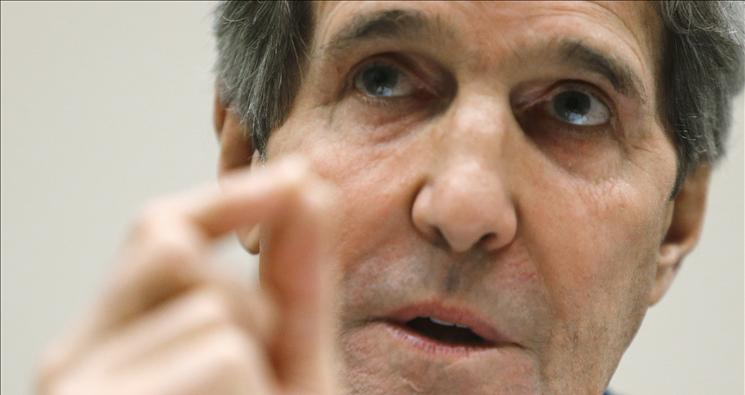 CONG. CHRIS SMITH R-NJ [House Hearing, 12/10]  – Did we raise Abedini’s case directly with the Iranians in the negotiations on the nuclear issue?

SEC. KERRY: The answer is that is not true. I personally raised the issue with Foreign Minister Zarif when I met him the very first time, and we have not linked it directly to the nuclear issue because we believe that prejudices them and it also prejudices the negotiation.

KERRY  – We don’t want them to become the hostages or pawns of a process that then gets played against something they want with respect to the nuclear program, nor do you I think. We want them returned because they are American citizens, because they have to be accountable to us for them and because they deserve to be returned on a fundamental humanitarian basis.

KERRY  -- …and we are—believe me I’m not at liberty to go into what is happening on it. And that is the difficulty in some of these situations many times because there are back channels and other kinds of efforts they are engaged in, but we have never stopped trying to secure their release or raising that issue with our representative nations that represent us in Tehran—with the Swiss, with the Swedish, with others—it is a constant process and we are engaged in that effort.

In his response, Secretary Kerry hearkens back to the Administration’s initial statement in the immediate aftermath of the nuclear deal, that Pastor Saeed was not raised in the negotiations because the negotiations “focused exclusively on nuclear issues.”

But – as we’ve noted before – this is manifestly untrue. The White House’s own “fact sheet” regarding the nuclear deal states that the United States will help “facilitate humanitarian transactions” with Iran. The U.S. has agreed to sanctions relief worth billions of dollars to Iran, including humanitarian aid.

Why can’t Iran facilitate a simple “humanitarian transaction” with the United States by releasing Pastor Saeed and every other American wrongly held in Iran? Iran’s economy is collapsing under the weight of sanctions, and the United States didn’t have the strength of will to mandate the smallest of humanitarian good faith gestures before giving Iran relief?

Perhaps most incredible, Secretary Kerry insists that linking Pastor Saeed’s fate to any easing of American sanctions within the nuclear deal “prejudices” him.

Representative Smith had a ready response:

CONG. SMITH  – And I do appreciate that but it seems to me that there was a window of opportunity, when they wanted something and wanted it desperately, to raise the issue at the negotiating table.  Let me ask you this--

KERRY: This opportunity is huge and still exists, but we’re not going to link them to the nuclear because it prejudices them.

SMITH: But he is at risk right now of death.

CONG. SMITH  – He’s been transferred to a more ominous prison; he’s in a cell with known murderers; he woke with a knife next to his face just recently—

Secretary Kerry responded by holding out a fig leaf of hope, a fig leaf that he couldn’t discuss in an open hearing:

KERRY: I’m happy to sit with you in a classified venue—providing it is cleared appropriately—and I can tell you what we’re doing, but it is a ongoing and constant effort.

SMITH: Do you have expectations that he and the others will be freed?

KERRY: I—I have a hope. I can’t speak for what they’ll do or not do.

Is there “classified” activity that provides solid grounds for Secretary Kerry’s expressed “hope?”  Obviously, we can’t know with any certainty, but one thing is clear – only continued public pressure will guarantee that Pastor Saeed – a U.S. citizen – stays  front and center in the Obama Administration’s mind.

Sign our petition demanding that Congress and the President stand firm against Iran and stand firm for Pastor Saeed.