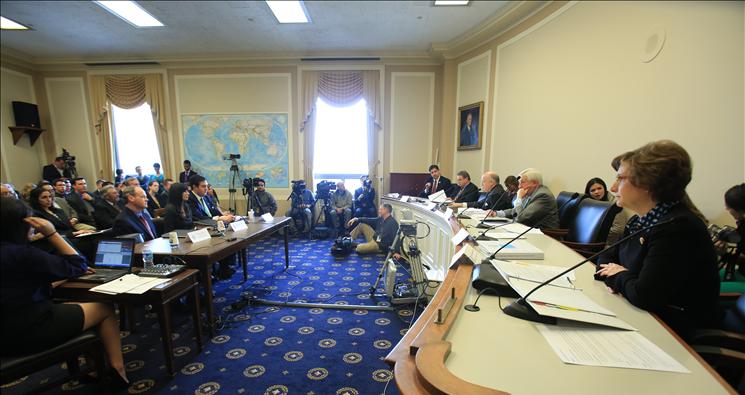 Members of the Tom Lantos Human Rights Commission and other members of the U.S. House of Representatives sent a letter to Secretary of State John Kerry today demanding that he make the case of American Pastor Saeed Abedini – a U.S. citizen - a priority for the State Department. The Commission also called on Secretary Kerry to swiftly issue a public statement calling for the immediate and unconditional release of Pastor Abedini

There was a palpable sense of disappointment in the room that our government didn’t deem the hearing important enough to provide a witness.  After repeated requests from the Lantos Commission, which went unanswered for nearly a week, the State Department ultimately said that no one was available to provide testimony.  Later that same day, Rep. Wolf’s staff attended a meeting with Mrs. Abedini, her legal counsel and several senior State Department officials including the Ambassador for International Religious Freedom, all of whom would have been suitable witnesses for our hearing.   In short, the department misled the commission and in so doing sent a dangerous message to rogue regimes the world over—even human rights abuses that compromise the safety and security of American citizens will be met with virtual silence from the U.S. government.

To date, the State Department’s posture on this case has been woefully inadequate, especially given that the life of an American citizen hangs in the balance.  Both the European Union and the United Nations (UN) special rapporteur on human rights in Iran have advocated publicly for Pastor Saeed—the same cannot be said of this administration.  The State Department recently responded to a February 12 congressional letter, signed by over 80 senators and representatives, urging the department to exhaust every option in securing Pastor Abedini’s release. The department stated, “We are disappointed that Mr. Abedini has been sentenced to eight years in prison in Iran on charges related to his religious beliefs…” Even the words chosen for this letter fail to convey an appropriate sense of urgency.

Let’s be clear:  We are “disappointed” that the department failed to provide a witness for Friday’s hearing and have in fact left the hearing record open for a week to allow the State Department to provide written testimony, which to date we have not yet received.  But like most Americans, we are outraged and appalled that the Iranian government has unjustly imprisoned an American citizen for his Christian faith.

We too join Chairman Wolf and his colleagues in their disappointment at the State Department’s utter lack of urgency and due care in pressing for the release of this U.S. citizen.

The letter to Kerry also notes:

Members sat with rapt attention listening to [Pastor Saeed’s wife’s] story — the challenge of explaining to her children where their father has gone while grappling with the reality that for Saeed, “every day is a death sentence.”  As a father yourself, we are sure you can imagine this young family’s pain.

The Members of Congress concluded:

We urge you, in the strongest possible terms, to make this case and the broader issue of religious freedom a priority as Secretary of State.  The State Department should swiftly issue a public statement calling for the immediate and unconditional release of Pastor Abedini.  Further, the department, preferably through a personal phone call from you to Naghmeh Abedini, should make it clear that the U.S. government will dedicate the full resources at its disposal to securing the freedom of Pastor Abedini—one of our own citizens.

Time is of the essence for the U.S. government to speak out in defense of one of our own citizens – one of us – imprisoned merely because of his religious beliefs.  We applaud the hard work and determination of the members of this Commission and other Members of Congress dedicated to religious freedom and urge the Secretary of State to hold true to his word and “actively engage[] on this case.”

If Secretary Kerry is unwilling to meet the Commission’s Friday deadline for a bold statement and increased engagement in this case, we are prepared to pursue further congressional action to see that Pastor Saeed’s case is made a priority for the U.S. government, his government.

Today marks the 176th day of Pastor Saeed’s imprisonment in one of Iran’s most deadly prisons. He faces an eight year sentence simply because of his Christian faith.