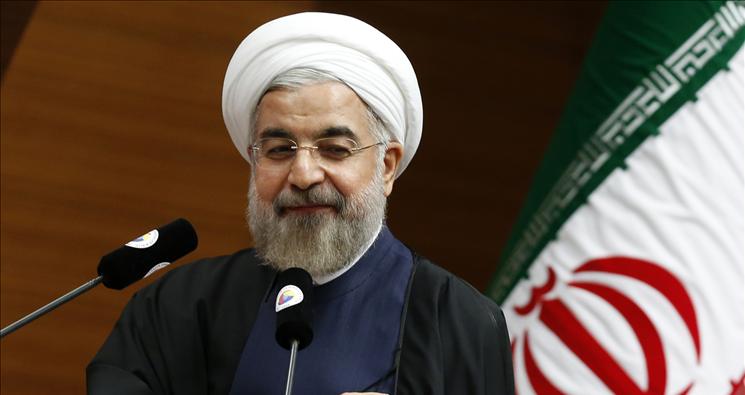 Rouhani was in the U.S. to address the United Nations General Assembly.  He was asked specifically about Pastor Saeed’s illegal imprisonment because he is a Christian.

You have -- and I'm going to read here -- a group of American Iranians, a British Iranian in prison right now.  Jason Rezaian, a journalist for "The Washington Post," and his wife; Saeed Abedini, who's a Christian; Amir Hekmati, who's been in jail for a long time; the English Iranian Ghoncheh Ghavami, who's also in jail. Without charge, without anything and we don't understand why and we would like to know whether you're prepared to deliver a gesture of goodwill to these people, to their families and to the world whom you're addressing from here at the United Nations.

Unfortunately, President Rouhani once again responded ignoring the real issue of how Pastor Saeed – a U.S. citizen – has been beaten, requiring medical attention, and imprisoned solely because of his Christian faith.

With a smirk on his face, President Rouhani responded:

We never wish for any individuals, Iranian or non-Iranian, be it in Iran or in other countries to be imprisoned or detained or be put on trial. But naturally, as a matter of course, individuals can be suspected of something by the judiciary, by the security organization and they are pursued. We are also worried about some Iranians that are imprisoned in America or in other countries, but through the will or by the actions of the United States of America and we wish for all of their fates to be resolved peacefully and successfully as soon as possible. We wish that for all families, for all parents, for all relatives who have good news about their detained relatives. But as the president – as the chief executive of my branch, it is -- my goal is for the laws to be respected. And I do hope that regarding every single person that you have named in your question or other people that are being subjected to detention or investigation, whether it be Iranian or a general foreign citizens or dual citizenship but everyone that you named who have dual citizenship, according to our nation's laws, are Iranian citizens only. We do not accept dual citizenship. But the bottom line is that our aim is for the laws to be respected at every step of the way. If they do go through trial, their trial be fairly executed for them to have access to every legal defense allowed under the law, proper defensive representation through qualified attorneys and we do hope that their families can gain the certainty that fairness and justice will be employed towards the cases and case files of their loved ones.

Disappointingly, President Rouhani’s comments ignore the stark reality of Pastor Saeed’s case.  Pastor Saeed is a U.S. citizen.  He did not receive a fair trial.  He wasn’t made aware of the charges brought against him until a week before trial.  He was not allowed to meet with his attorney until 24 hours before trial.  He and his attorney were barred from attending the second day of his trial as evidence was brought against him with no opportunity to defend himself.  That’s not Justice.  That’s not fairness.

In fact, the United Nations Human Rights Council Working Group on Arbitrary Detention detailed numerous violations of international law, including the unfair nature of his trial, concluding that Pastor Saeed’s conviction was “arbitrary” and that Iran should immediately “release” him.

No President Rouhani, he was subjected to a sham trial, tried merely because of his religious beliefs, in violation of Iranian law and the laws of nations.

He’s been beaten and is in need of medical treatment.

There has been no “fairness and justice” in his case.

He’s now been imprisoned two long, grueling years.  He deserves to be home with his wife and kids.  That is the only fair and just result.

Today, as Pastor Saeed marks the second anniversary of his wrongful imprisonment, thousands around the globe are joining together in over 600 prayer vigils in 33 countries worldwide to pray for his freedom and for all those persecuted for their faith.

Last night hundreds gathered with us in front of the White House for the kickoff event of a day of prayer for Pastor Saeed.

The more President Rouhani is called to account, is presented with the facts of Pastor Saeed’s case, the more pressure is placed on Iran to free this innocent man.

Please join nearly 300,000 others in signing the petition for Pastor Saeed’s freedom at BeHeardProject.com and learn more about today’s prayer vigils at SaeedVigil.com.

You can watch the full video with President Rouhani here.