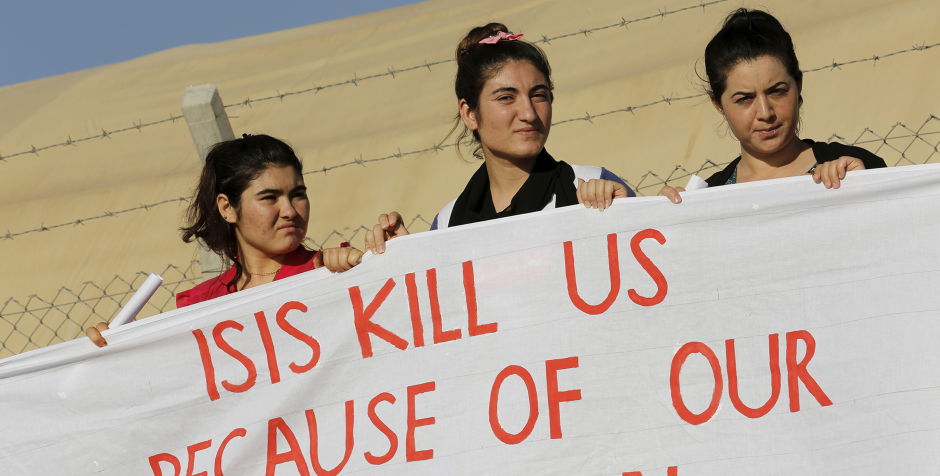 Genocide: “A Problem From Hell”

Genocide: "A Problem From Hell"

In her recent prize-winning book, “A Problem from Hell”: America and the Age of Genocide, UN Ambassador Samantha Power argues forcefully that genocide is emboldened by U. S. inaction. Surveying recent world history that includes the killing fields of Rwanda and Cambodia and Europe’s largest massacre in fifty years in Srebrenica, she insists that the U. S. government often abstains from sending its troops and takes very few steps to intervene to deter genocide while echoing a sad refrain: “never again.”

Today, this genocidal pattern continues.  In 2014, the world watched in silence as the last Christians were expelled from Mosul, Iraq in one of the most barbaric acts of genocide seen in the 21st Century. Last year, both the world and American leaders watched with muffled voices as thousands of Yazidis, Turkmen, Kurds and Christians were slaughtered in Syria in ruthless acts by the Islamic State. This past month, a few weeks after an Islamic State inspired attack in Paris, similarly inspired terrorists launched a bloody assault in San Bernardino California.

At the same time non-governmental organizations such as the International Religious Freedom Roundtable have asked President Barack Obama to take action because of the numerous atrocities committed against Christians, Yazidis, and others at the hands of the Islamic State. Such letters invite the President to examine the indisputable evidence of an ongoing genocidal campaign designed to create a global caliphate devoid of religious freedom and religious diversity.

This campaign, which includes the public rape of Christian women and the beheading of Christian men and children, operates with impunity and in violation of Article II of the United Nations Convention on the Prevention and Punishment for the Crime of Genocide. As others have richly noted, the history of genocide as a legal concept cannot be separated from the parallel existence of crimes against humanity, crimes that continue to spread within and outside of the Middle East.

At the same time, former Secretary of State Hillary Clinton has overcome her previous reluctance; she now concedes that the Islamic State has initiated a brutally violent campaign to destroy not only the lives, but to wipe out the very existence of Christians and other religious minorities in the Middle East.

On the other hand, the Obama Administration and the State Department, faced with growing calls to acknowledge this genocide, have spent months debating whether to label the Islamic State’s attacks against members of only one religious minority, the Yazidis, a "genocide," a classification that carries important legal and political implications.

This situation raises an important question: what about others? In particular, what about the largest non-Muslim minority in the Middle East: Christians. In response to the Administration’s reluctance to designate Christians as victims of genocide, many organizations and individuals have urged Secretary of State John Kerry to include Iraqi and Syrian Christians as well, thus raising a further question: if not now, when?

Despite such questions, it appears that American leadership remains paralyzed by elite indifference to the plight of Christians and others in the Mideast and elsewhere. In spite of President Obama’s appointment of Samantha Power to serve as the Chair of the Atrocity Prevention Board several years ago, and despite the fact that the President has announced that the prevention of atrocities is a key focus of this Administration's foreign policy, it is clear that neither appointments nor rhetoric are enough to deter the slaughter of Christians and other religious minorities. Rather, the use of appointments and elevated rhetoric as a substitute for action appear to be a form of elite indifference.

Indifference is aptly illustrated by the recent statement by the United States State Department, which listed “Bringing Peace and Security to Syria” as one of its major achievements in 2015. Such statements underscore Samantha Power’s richly ironic contention that the battle to stop genocide has been frequently lost in the realm of domestic politics, a claim that appears to be reinforced by this Administration’s current inaction.

Indifference demands a vigorous response from “We the People.” It is time for concerned Americans to join with Bipartisan efforts in Congress, the ACLJ, the M.G. Robertson Global Centre for Law & Public Policy, other non-governmental organizations and religious leaders from around the world to rouse Ambassador Power, Secretary of State, Kerry and the current Administration from their slumbering indifference so that the nation can take forceful action to stop the Islamic State from annihilating Christians and other religious minorities. Otherwise, genocide, the problem from hell, will flourish.

The ACLJ will continue our work on Capitol Hill, in New York and Paris and around the world to raise awareness of the Islamic State’s reign of terror as we urge our government to take the lead to end genocide and eliminate indifference to the rape and murder of Christians and others so that the phrase “never again” becomes a reality.