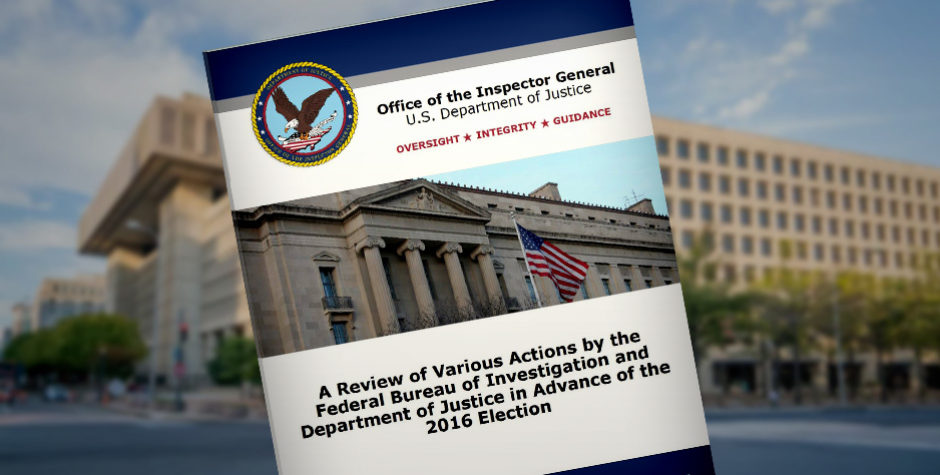 The Department of Justice’s Inspector General (IG), the DOJ’s internal watchdog, just released a scathing 568-page report condemning the actions of senior FBI officials during the height of the 2016 election, including their handling of the Clinton Email Investigation.

The report rebukes the actions of former FBI Director James Comey, senior FBI counterintelligence agent Peter Strzok, FBI attorney Lisa Page and ousted Deputy Director Andrew McCabe. The report confirms what we already knew: the actions of these senior officials cast a cloud over their credibility and the impartiality of the FBI.

On January 12, 2017, Inspector General Michael Horowitz, appointed by President Obama in 2012, began his investigation of the actions of senior officials in the DOJ and FBI leading up to the 2016 election.

The investigation pursued allegations that Comey failed to follow department policies in his handling of the Clinton Email Investigation. He usurped the role of the Attorney General by announcing what a “reasonable prosecutor” would do in July 2016, and then reopened and subsequently reclosed the investigation again in the final days of the election. The mandate also included a review of the influence of “improper considerations” on the investigation by senior officials.

Now, 18 months later, IG Horowtiz has completed his report. While the report does not make judgments about the legal findings in the Clinton investigation, the report does make several stunning conclusions regarding the recklessness of James Comey and the partisanship of his staff.

First, the report concludes that key senior FBI officials who were “critical” in ongoing investigations engaged in “political bias” that “raised questions about the objectivity” of the Clinton investigation that goes to the very “heart of the FBI’s reputation” for “political independence":

…we found that several FBI employees who played critical roles in the investigations sent political messages–some of which related directly to the Midyear [Clinton] investigation– that created the appearance of bias and thereby raised questions about the objectivity and thoroughness of the Midyear [Clinton] investigation…this is antithetical to the core values of the FBI and the Department of Justice. While we did not find documentary or testimonial evidence that improper considerations, including political bias, directly affected the specific investigation actions…the conduct by these employees cast a cloud over the entire FBI investigation…the damage caused by these employees’ actions…goes to the heart of the FBI’s reputation for neutral factfinding and political independence.

Second, the report concludes that Comey “chose to deviate from the FBI’s and the Department’s established procedures and norms and instead engaged in his own subjective, ad hoc decision making.” The report explains that while these “decisions were not the result of political bias on Comey’s part,” by departing so “clearly and dramatically” from those norms, Comey “negatively impacted the perception of the FBI and the Department as fair administrators of justice.”

usurped the authority of the Attorney General and upset the well-established separation between investigative and prosecutorial functions and the accountability principles that guide law enforcement decisions in the United States.

Further, the IG report was critical of Comey’s actions in deciding to hold a press conference closing the investigation on July 5, 2016 and then reopening it again on October 28, 2016:

We found that it was extraordinary and insubordinate for Comey to conceal his intentions from his superiors, the Attorney General and Deputy Attorney General, for the admitted purpose of preventing them from telling him not to make the statement, and to instruct his subordinates in the FBI to do the same.

In addition to these unprecedented revelations, the IG’s report also contains previously unreported text messages between Strzok and Page, which only further prove their anti-Trump bias. On August 8, 2016, Page wrote, “[Trump’s] not ever going to become president, right? Right?!” To which Strzok responded saying, “No. No he’s not. We’ll stop it.” When Strzok was asked by the IG to defend his statement, Strzok said:

that had he – or the FBI in general–actually wanted to prevent Trump from being elected, they would not have maintained the confidentiality” of Russian meddling and “alleged collusion” in the 2016 election.

This text came exactly one week before the infamous meeting in then-FBI Deputy Director Andrew McCabe’s office where Strzok, Page, and McCabe discussed “an insurance policy” against then-candidate Trump. In an August 15, 2016 text, Strzok told Page:

I want to believe the path you threw out for consideration in Andy’s office–that there’s no way he gets elected–but I’m afraid we can’t take that risk. It’s like an insurance policy in the unlikely event you die before you’re 40…

Strzok’s defense? “[H]e did not remember the specific conversation” but it was most likely part of a large discussion of “how aggressive to be” given that Clinton was “the ‘prohibitive favorite’ to win.” Another unacceptable excuse that only further reveals his political bias.

This report is shocking. The IG’s report is clear: senior FBI and DOJ officials expressed explicit anti-Trump bias and used their authority to break with investigative and department norms and procedures, influencing the election, casting these neutral arbiters of justice into doubt and scandal.

At the ACLJ, we have fought to hold these Deep State officials accountable to the American people. Our Freedom of Information Act (FOIA) and Government Accountability Projects have uncovered lies by the previous administration’s handling of the Iran Deal, attempts to unseat the elected government in Israel, and more.

With your help, we can continue to uncover the truth and prevent this type of corruption from influencing our democracy.