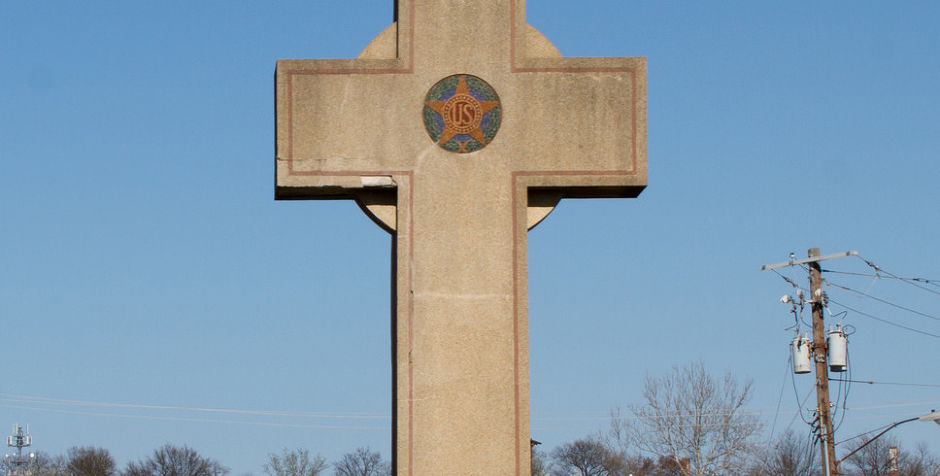 Today, a federal district court rejected the demands of an angry atheist group to tear down a World War I memorial cross.

The United States District Court for the District of Maryland ruled in favor of the American Legion’s Blandensburg Cross World War I Veterans Memorial honoring the 49 brave residents of Prince George County, Maryland who fought and died in World War I. The cross was erected in 1925, but was attacked by the American Humanist Association in a federal lawsuit in 2014.

The Bladensburg Cross, or “Peace Cross” as it became known, has stood since that day as a testament to the heroism, the sacrifice, that these brave young men displayed fighting for America – fighting for our freedom.

That is until one angry atheist, literally riding his bike around town, discovered the cross.  He was “shocked” at the sight of the cross and “upset” that the cross could possibly be displayed to honor our nation’s veterans. . . .

The lawsuit actually alleges that because the war memorial is located on what they claim is public property near a busy intersection that at least one of the plaintiffs passes “about once a month” driving around town or on his bike, it “associates a Christian religious symbol with the State and gives the impression that the State supports and approves of Christianity, as opposed to other religions, and that the state may even prefer Christians and Christianity over other religions.”  One of the plaintiffs actually says that he is “personally offended and feels excluded” because the cross honors our nation’s veterans.

In fact, the lawsuit states that he was “shocked when he first saw the cross and it upsets him whenever he passes it.”

Each of the plaintiffs complains of “unwelcome contact” with the WWI memorial cross and tell the court they “do[] not wish to encounter the Bladensburg Cross in the future.”  In other words, they want it torn down.

It’s just one more example of angry atheists who become so easily offended by the very sight or even the existence of something they supposedly don’t believe in.

But once again, a federal judge has ruled in favor of the American Legion, defending the Constitutional rights of U.S. citizens to commemorate veterans who have sacrificed everything for our freedom.  As we’ve argued previously and Judge Chasanow cited in her opinion today, the Supreme Court in Salazar v. Buono recognized that “a Latin cross is not merely a reaffirmation of Christian beliefs. It is a symbol often used to honor and respect those whose heroic acts, noble contributions, and patient striving help secure an honored place in history for this Nation and its people.”

In other words, memorial crosses that include crosses do not constitute constitutional crises.

“Additionally, although the construction of a cross can be for a religious purpose, in the period immediately following World War I, it could also be motivated by “the sea of crosses” marking graves of American servicemen who died overseas. The Monument’s secular commemorative purpose is reinforced by the plaque, the American Legion’s seal, and the words “valor,” “endurance,” “courage,” and “devotion” written on it. None of these features contains any religious reference. In short, the record amply demonstrates that the construction and maintenance of the Monument “was not an attempt to set the imprimatur of the state on a particular creed. Rather, those who erected the cross intended simply to honor our Nation’s fallen soldiers.” (p. 23-24)

This is another huge win for the U.S. Constitution and our national heritage against angry atheists’ dubious constitutional claims.

The American Humanist Association may appeal this decision to the Fourth Circuit. If they do, we will be there to file an amicus brief defending the Constitution and war memorials commemorating the sacrifices made by our men and women in uniform.