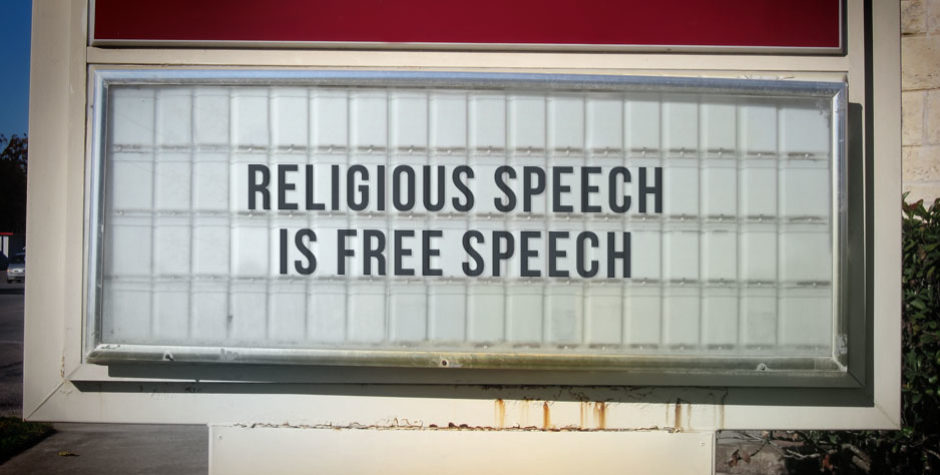 Like many local governments, the City of Grand Rapids, Minnesota, tries to assist citizens in publicizing upcoming community events. Grand Rapids does this through its Readerboard, a large electronic marquee on which nonprofit organizations may advertise their activities, subject to certain restrictions. Among these restrictions, as one local Christian organization discovered, however, was an outright prohibition against any ads that contained religious content. Believing this type of government policy to be unlawful, the organization reached out to the ACLJ for help, and we are pleased to be able to report that our efforts on behalf of the group have been a success.

After submitting its request to post about an upcoming concert it was hosting, the organization received correspondence from the Readerboard team explaining that the posting violated the Readerboard Policy’s provision prohibiting religious content. The City apparently believed that the Constitution required such a prohibition by government entities.

In our letter to the City, we explained that when it comes to religious content, there is a crucial distinction between government speech and private speech. Because the Readerboard Policy created a forum for private speech by local citizens, the City is actually prohibited from rejecting a proposed Readerboard ad on the basis of its religious content. This provision of the Policy, we explained, results in viewpoint discrimination against private speech, which the First Amendment forbids.

We also noticed that the Policy suffered from another constitutional flaw by giving the Readerboard Manager unfettered discretion to deny any proposed posting for any reason at all, with no recourse to appeal that decision. As we pointed out to the City, this type of provision constitutes a prior restraint against speech, allowing the government to silence private speech before it ever occurs without any guidelines to constrain the decisionmaker. Even if such policies are not actually used in a discriminatory manner, the Supreme Court has made clear that they are unconstitutional because they leave the door wide open for such treatment.

To ensure that our client, and other religious organizations, would not suffer further discrimination, we asked that the City remove the offending provisions from the Readerboard Policy and that it treat religious nonprofit organizations in the community in the same manner as it treats nonreligous groups for purposes of posting on the Readerboard.

To its credit, the City has agreed to cease application of these provisions and is working with its other Readerboard partners to amend the Policy permanently, including the removal of these unconstitutional provisions. Our client, along with other religious organizations in the Grand Rapids area, is now free to advertise events in the same manner as other nonreligious organizations are permitted to do so, consistent with the clear requirements of the First Amendment.