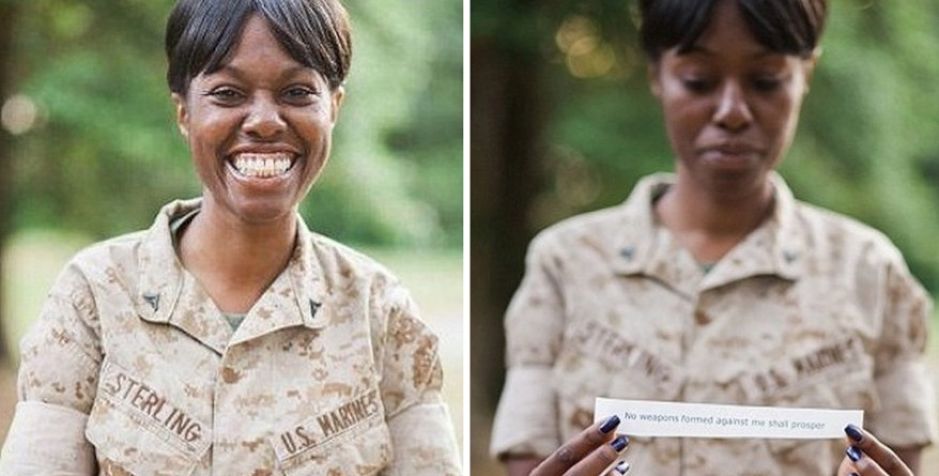 Never has religious liberty been under greater attack in our nation’s military.  Just how bad things are was demonstrated recently in the case of United States v. Sterling.

In that case, the United States Navy-Marine Corps Court of Criminal Appeals held that the Marines could order Lance Corporal Sterling to remove a Bible verse that Sterling had posted in her work station.  Sterling, a devout Christian, posted Isaiah 54:17 (“no weapon formed against you shall prosper”) on very small pieces of paper in three places around her work station, to remind herself of the Trinity. As for many Christians, Isaiah 54:17 carried very special meaning for Sterling, and she especially found it encouraging in her work environment. At the time, her work station consisted of a desk and computer which she did not share with anyone else.

Sterling’s superior officer saw the scripture verses, “did not like their tone,” and told Sterling to “remove that,” referring to the Bible verse as a profanity that we will not repeat. When Sterling refused, her superior officer removed the verses and threw them in the trash.

At her court martial hearing, Sterling argued that her First Amendment right to religious freedom had been violated.   The judge disagreed and the Navy-Marine appellate court affirmed.  Shockingly, the appellate court held that Sterling was NOT exercising her religion when she posted the Bible verse in three places at her work station. Rather, the court believed that Sterling’s Bible verse postings were motivated by “subjective beliefs” that were not legitimately “part of a religious belief system.” The court concluded that the Religious Freedom Restoration Act, the federal law protecting religious freedom, did not apply to Sterling’s case.

Sterling has now appealed the case to the United States Court of Appeals for the Armed Forces, and we are preparing to file an amicus brief on behalf of key Members of Congress urging the court to hear the case.  We will argue that the Navy-Marines court was wrong in refusing to apply the Religious Freedom Restoration Act to Ms. Sterling’s case.  It is no business of any court to dissect religious beliefs, or to pass judgment on whether those beliefs are part of a religious belief system. If the lower court’s decision is not reversed, it will threaten religious liberty for all members of the United States military.

Stand with us in our fight to protect religious liberty for Service members, who are willing to give their lives that we may all live in freedom.