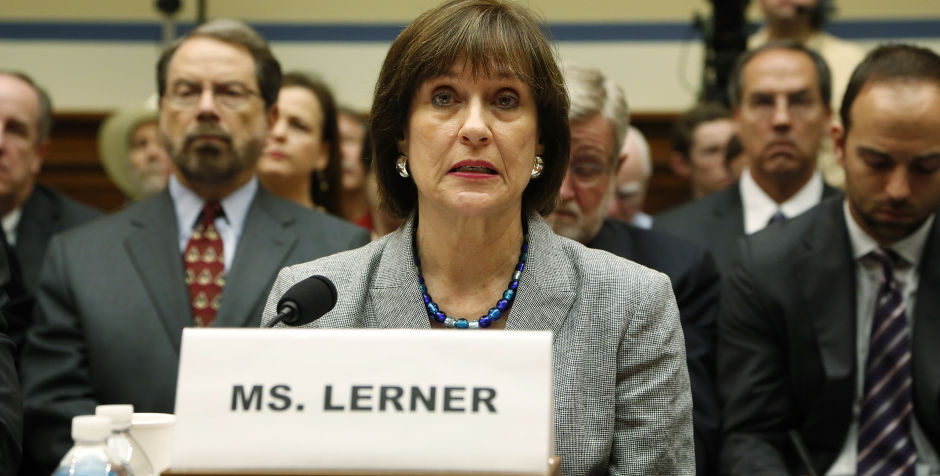 In an alphabet soup of corruption, the Obama Administration’s IRS, FBI, and DOJ have once again been exposed attempting to target and prosecute political opponents.

New documents reveal that several IRS officials, including Lois Lerner, colluded with the FBI and the Department of Justice (DOJ) on “several possible theories to bring criminal charges” against conservative groups as early as 2010.

As the Washington Free Beacon reports:

Newly obtained documents from the conservative educational foundation Judicial Watch detail an official memo from October 2010 of a meeting between Lois Lerner and officials at the Department of Justice and the FBI to plan for the prosecution of targeted nonprofit organizations.

A lawsuit filed under the Freedom of Information Act produced the documents which included the memo as well as revelations that the Justice Department wanted IRS employees to turn over sensitive documents before giving them to Congress, Judicial Watch said in a press release Tuesday. . . .

An IRS document confirms that the organization supplied the FBI with 21 computer disks containing 1.25 million pages of confidential information from more than 113,000 tax returns.

Meeting notes from this high level October 8, 2010 meeting show that former top IRS official Lois Lerner and several other IRS officials “met with the section chief and other attorneys from the Department of Justice Criminal Division’s Public Integrity Section, and one representative from the FBI, to discuss recent attention to the political activity of exempt organizations.”  Those discussions focused on “several possible theories to bring criminal charges” against these conservative groups.

This level of collusion between the IRS, FBI, and DOJ at the time conservative groups were being targeted for their political beliefs by Lerner’s division of the IRS is suspect to say the least.  However, it is exacerbated by the fact that Lerner and the DOJ continued these conversations for years.  Nearly three years later, in fact two days before Lerner issued her faux “apology” for targeting conservatives, Lerner wrote an email to the Chief of Staff for the acting Commissioner of the IRS explaining ongoing discussions with senior DOJ officials to “piece together false statement cases about applicants.”

As this information became public last year, I asked, “Did Lois Lerner Want Conservatives to go to Jail?”  It seems the resounding answer today is yes.

In fact, in furtherance of this collusion, the IRS had sent the FBI 21 computer disks, which included 1.25 million pages of presumably confidential taxpayer information on 113,000 non-profit groups.  This could have encompassed nearly every 501(c)(4) group in the country.

The IRS was hitting conservatives from every angle.

The “recent attention” discussed at this October 2010 meeting between Lerner, other IRS officials, the DOJ, and FBI is the same “media attention” on conservative organizations that started the targeting of the Tea Party under Lois Lerner’s watch beginning several months earlier in 2010.

As I’ve written before, understanding the timeline of the earliest events in the targeting is the key to understanding what actually happened.  As ACLJ Executive Director Jordan Sekulow and I chronicled in the Washington Times:

[E]mails show that within 24 hours of the first Tea Party case being flagged in early 2010, senior IRS officials under Ms. Lerner’s command in Washington took control. . . .

Feb. 25, 2010: In an email chain between senior IRS officials in Washington and field offices in Cincinnati and California titled “High Profile Case — Does [Exempt Organizations] Technical Want It?” Holly Paz, who would later become Ms. Lerner’s deputy in Washington, was made aware that a “potentially politically embarassing [sic] case involving a ‘Tea Party‘ organization” had been flagged. By the next morning, Ms. Paz requested that it be sent to Washington, “given the potential for media interest.”

March 16-17, 2010: The same email chain, now titled “High Profile Case — EO Technical Would Like It,” continues, with Ms. Paz acknowledging that she had “one Tea Party case up here” and instructing Cincinnati to send “a few more cases” to Washington and to “hold the rest.” Ms. Paz, from Washington, clearly instructed the Cincinnati IRS office that Washington would be responsible for future Tea Party cases, stating, “we will work with [Cincinnati] in working the other cases.” The chain continues with senior IRS officials in Cincinnati and California confirming their implementation of Washington’s orders to “hold” the “Tea Party cases.”

April 23, 2010: Steven Grodnitzky, the acting manager of EO Technical, directly below Ms. Paz in Washington, instructed his staff to create a “[Sensitive Case Report] for the Tea Party cases.” He further instructed senior IRS officials in Cincinnati and California that his office in Washington was working on the first “2 Tea Party cases” and that their offices should “coordinate” with his office and set up “a call” before developing the rest of the cases. Emails over the next few days between Mr. Grodnitzky in Washington and IRS officials in Cincinnati and California, under the subject line “Tea Party Cases,” show that coordination being put in place.

July 6, 2010: Ms. Paz instructed Mr. Grodnitzky to follow up with the IRS teams in Cincinnati and California and remind them “we have been handling Tea Party applications the last few months.” Mr. Grodnitzky, again from Washington, reiterated the instructions, “[Exempt Organizations Technical] is working the Tea Party applications in coordination with Cincy … . Because the Tea Party applications are the subject of an SCR, we cannot resolve any of the cases without coordinating with Rob.” “Rob” is presumably Rob Choi, who was then director of rulings and agreements in Washington, directly below Ms. Lerner. It was Ms. Paz who replaced Mr. Choi as Ms. Lerner’s deputy in December 2010.

From there, we know the applications of conservative groups were held for two more years, until senior IRS officials in Washington, including the IRS chief counsel’s office, developed unconstitutionally intrusive demand letters, which began being sent out in early 2012.

For more than three years the IRS was targeting, delaying, and abusing the constitutional rights of conservative groups.  At the same time, over the course of three years, Lerner and the IRS were colluding with the FBI (likely illegally providing it confidential information on those groups) and the DOJ to “piece together” criminal charges against these same groups.

The connection and unthinkable abuse of power could not be more clear.

Yet, we are only learning the details of this ongoing corruption drip by drip because for years the IRS has successfully stonewalled every attempt to obtain any information about this scandal by employing a “special project team” of “hundreds of lawyers” to hid the truth.

But all of that is beginning to change.

At the ACLJ, we continue to press for the truth and accountability with two ongoing lawsuits against the IRS.  Recently, in one of our cases, we were able to force the IRS to turn over key documents for review by a federal judge – documents the IRS has fought for years to keep hidden.  In our other case, representing dozens of targeted conservative groups from 22 states, we are preparing to file an important brief on appeal.  We will continue fighting for justice as the more we learn the worse it gets.