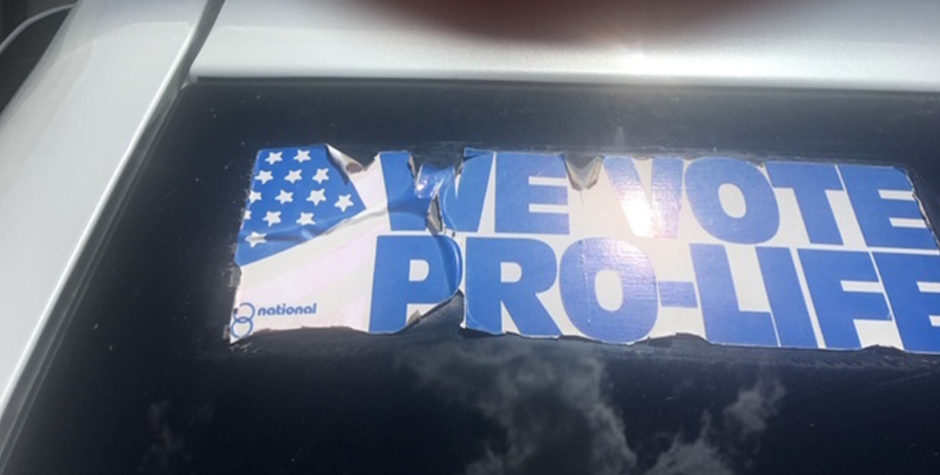 It’s hard to imagine a less offensive bumper sticker than the generic “We Vote Pro-Life” sticker we’ve all seen while sitting in traffic or maybe walking through our church’s parking lot. Nothing edgy, no graphic pictures, nothing in your face. Just four words, usually superimposed on an American flag-type background.  It’s not imperative. Unlike many bumper stickers, it doesn’t tell the readers what they should do. It just says what “we” – presumably the car’s owner and family – do.

And because the sentiment it expresses is so generic that it applies to all elections across the years, often enough the “We Vote Pro-Life” sticker is worn and faded with maybe an edge or two peeling off. Nothing you’d necessarily expect even the most ardent abortion zealot to get too excited about, right?

Well, maybe wrong. Consider what happened recently to Lorraine LeGates, an election official in North Carolina whose not-so-new minivan has sported a not-so-new “We Vote Pro-Life” bumper sticker for years. Lorraine was called on the carpet by her boss in the county Board of Elections office. She was directed to remove the bumper sticker from her car forthwith. The sticker, she was told, was inappropriate for someone working in the elections office and, moreover, was a violation of North Carolina law.

Lorraine was skeptical but, understandably, concerned about her position. So she contacted us here at the ACLJ. We quickly established some facts. Lorraine’s car was her family’s car, not owned by the county, with nothing on the car to identify it as belonging to anybody connected with the Board of Elections. The car was never parked in a county parking lot; rather, like other county employees, Lorraine parked in whatever parking spaces happened to be available along the public street where the building housing the Board of Elections and other tenants was located.

At Lorraine’s request, we prepared a letter explaining that public employees have First Amendment free speech rights too. As the Supreme Court said in the case of Connick v. Myers, 461 U.S. 138, 154 (1983), “Our responsibility is to ensure that citizens are not deprived of fundamental rights by virtue of working for the government . . . .”  As the Court later put it, “So long as employees are speaking as citizens about matters of public concern, they must face only those speech restrictions that are necessary for their employers to operate efficiently and effectively.” Garcetti v. Ceballos, 547 U.S. 410, 419 (2006). We pointed out that whatever arguably valid concerns might hypothetically be raised about a public employee’s private expression of her views being misconstrued as the official position of her government employer, those concerns weren’t present under Lorraine’s circumstances. No reasonable person would be likely to recognize that, in this situation, “We Vote Pro-Life” was even being said by a public employee.

We then showed that the concern about North Carolina law was also unfounded. That law prohibits county election officials and employees from making or disseminating statements supporting or opposing “clearly identified candidates for public office.” So, unless there happened to be somebody running for office with the unlikely surname of “Pro-Life,” it would be hard to imagine how anybody could misinterpret the faded bumper sticker on the minivan parked ten cars up the street from a county Board of Elections office as running afoul of the North Carolina law.

Lorraine presented our letter to her boss who passed it along to the County Attorney. We’re happy to report that the County Attorney agreed with our interpretation. Lorraine and her family are keeping “We Vote Pro-Life” on their van – although they have replaced the worn-out sticker with a fresh one!

We at the ACLJ were pleased and honored to go to bat for Lorraine LeGates as we have been honored to represent pro-life citizens for decades across the country and around the world. Sometimes we have to go all the way to the Supreme Court to vindicate our pro-life clients’ rights. Sometimes, as here, it only takes a fairly simple letter and some common sense. But whatever it takes – and especially now in the thick of election season where issues of life are increasingly at the forefront – we stand ready to advance the cause of freedom of speech for those, like Lorraine LeGates, who speak for the voiceless.