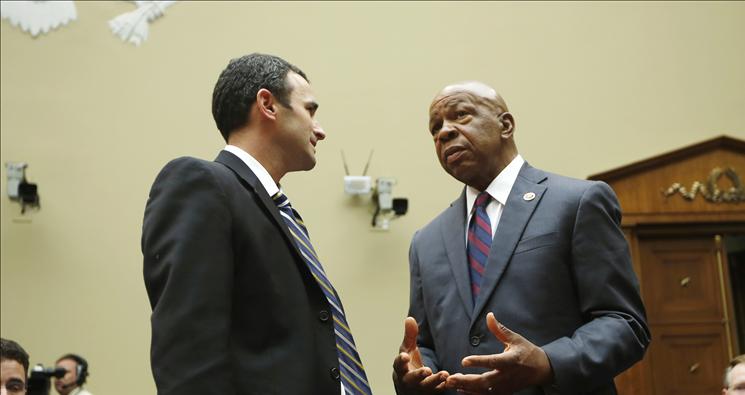 After first attacking the victims, the Left has decided there is no need to further investigate the IRS targeting of conservative groups for their beliefs.

Over the weekend, Representative Elijah Cummings (D-MD), the ranking member of the House Committee on Oversight and Government Reform, proclaimed the end of the need for an investigation into the IRS targeting.  He said, “the case is solved,” and we all just need to “move on.”

Until now he was one of the most outspoken critics on the Left of the IRS scandal, at least feigning outrage at the IRS’s intentional targeting of U.S. citizens for onerous scrutiny merely because of their beliefs.

Representative Cummings, who once called for a “thorough investigation” to restore “truth and trust,” has joined a chorus of others on the Left in taking a “move on,” nothing to see here tack.

He based this abrupt new assertion on a congressional interview of someone he termed a “conservative republican” “manager” in the IRS Exempt Organizations office who said he decided to send “one case” to the technical office in Washington, D.C. for further review.  Based on this singular statement, Representative Cummings decided that the IRS targeting case is closed and that the mounting evidence that the IRS targeting was conducted and directed by Washington is “absolutely wrong.”

In other words, we found out that one agent decided to send one Tea Party application on to D.C. for further review and because that agent is a self-described “conservative,” Representative Cummings has unilaterally decided “the case is solved.”

It is now abundantly clear that the Left's outrage was feigned.  It wasn’t real.  It was fake.

The Left has their fall guy, and now they are done.  So much for “truth and trust.”

We know that dozens, maybe even hundreds, of conservative groups were targeted.  We know that terms like “Tea Party” and “Patriot” were put on a BOLO (Be On the LookOut) list.  Groups of U.S. citizens were also targeted by their government because they “criticize how the country is being run.”  We know that at least two IRS agents in Cincinnati have said they were directed in targeting the Tea Party by officials in Washington (one pointing to an IRS attorney, Carter Hull, who we know was involved in the targeting).  The most senior level IRS officials at the center of the scandal either refused to testify or couldn’t remember anything (something Representative Cummings previously said was “one of their most significant failures, and I do not believe their answers to date have been sufficient”).

Yet, now, with no answers to questions about the BOLO list, the 3 year and counting wait for targeted groups, stonewalling from senior officials, no answer as to who approved the targeting, and how it was allowed to continued even after it was supposedly stopped the first time, the “case is solved.”

Hardly.  That is like saying the case of a robbery is solved because one witness said that the perp “went that-a-way.”

The idea that because one agent decided that one, what he termed “high profile,” case needed to be reviewed in Washington explains away the entire complex IRS scandal is utterly preposterous.

The congressional investigations will continue.  Our lawsuit will continue.  The American people deserve the truth, the whole truth.  We cannot allow the Left to scapegoat or the media to trivialize what happened.

The fact remains that the U.S. government targeted its own citizens, until we have answers to the daunting questions about how that unconstitutional targeting not only began but was allowed to continue for years unimpeded, this case will remain far from solved.