Last week when I tried to walk onto the World War 2 memorial I was abruptly escorted out by the police (see the picture below). I was not alone, as I witnessed veterans of the Iraq War and other wars denied access to the memorial. This act blatantly violated my First Amendment rights and the rights of the veterans and other citizens to the privately-funded, open-air World War 2 Memorial. 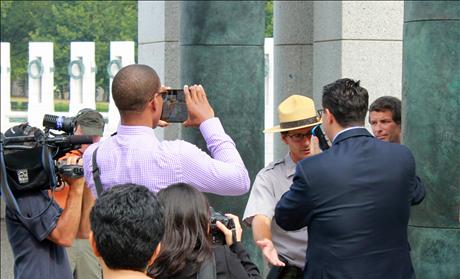 On Monday, we delivered a demand letter to the National Park Service, putting it on notice that they would be sued if they refused to honor Americans' First Amendment rights. Yesterday we sent a Freedom of Information Act Request to discover the truth about the Obama Administration's use of our veterans as political pawns.

Today -- one day after the Obama Administration opened the National Mall for a pro-amnesty immigration rally -- I sent an ACLJ legal team back to the World War 2 Memorial, and they were not only able to access the memorial, the signage had changed(see picture at top of page) to illustrate that the NPS was respecting the First Amendment.

This is a victory for the Constitution and common sense, and as I type this post we're checking the status of other memorials in Washington.