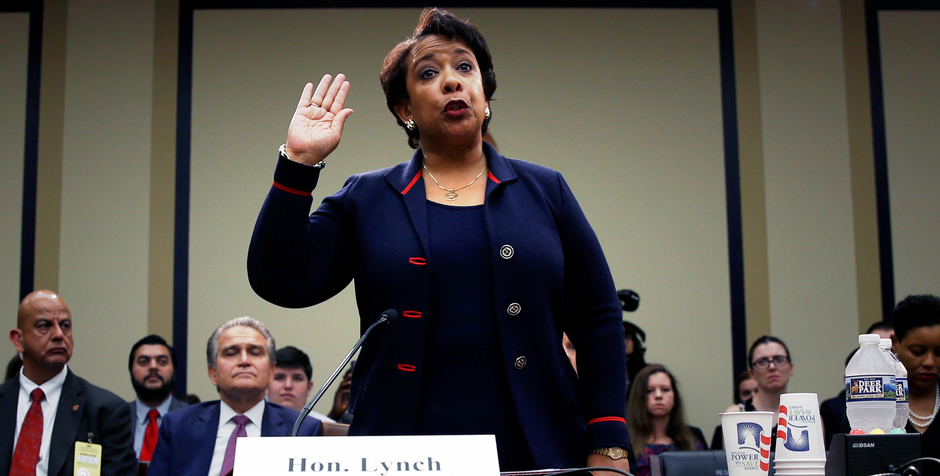 One of the most recent unethical acts of corruption occurred in late June when Attorney General Loretta Lynch had a private (and secret) meeting with former President Bill Clinton, whose wife – former Secretary of State Hilary Clinton – was under an ongoing Department of Justice (DOJ) criminal investigation as part of the State Department email scandal.

As America’s chief law enforcement officer, Attorney General Lynch “supervise[s] and direct[s] the administration and operation of the Department of Justice, including the Federal Bureau of Investigation.” Former Secretary Clinton was under DOJ criminal investigation. No matter the purpose, that meeting – with a witness, husband of the target of the investigation, and potential subject of investigation himself – was unethical and unacceptable.

While the corruption within the Obama Administration seems overwhelming, it is important that we take decisive legal action to hold our government responsible for its actions. As we reported before, our senior litigation team was preparing to file legal demands. As promised, this week we delivered a Freedom of Information Act (FOIA) request to the DOJ and the Federal Bureau of Investigation (FBI). Our request “seeks any and all records pertaining to Attorney General Loretta Lynch’s meeting with former President Bill Clinton on June 27, 2016, which occurred on her airplane at the Sky Harbor International Airport in Phoenix, Arizona.”

In our request, we reminded the DOJ and FBI that

[t]his matter is of grave importance to the public. General Lynch is the head of the Department of Justice — and the nation’s chief law enforcement officer. As recognized by a United States District Judge and the White House, the DOJ was, at the time of the meeting at issue, engaged in a “criminal investigation” of Hillary Clinton, . . . with respect to her use and deletion of emails. At the time of the meeting, the DOJ itself had described the investigation as a “law enforcement matter.”

According to Sen. Chris Coons (D-Del.), “it doesn’t send the right signal.” Indeed, both the meeting and the “personal or political relationship” evidenced by the meeting and affirmed by General Lynch in her comments after the meeting implicate Federal Regulations and DOJ Standards of Conduct.

Less than a week after the meeting occurred on General Lynch’s airplane, it was reported that the FBI interviewed Hillary Clinton on Saturday, July 2, 2016, over the July 4th weekend. Then, on Tuesday, July 5, 2016, FBI Director James Comey announced the FBI was not recommending that Hillary Clinton be prosecuted “for her handling of classified documents and sensitive information, which she conducted on a private email server during her time as secretary of state.” On July 6, 2016, General Lynch announced: “I received and accepted their unanimous recommendation that the thorough, year-long investigation be closed and that no charges be brought against any individuals within the scope of the investigation.” Thus, the criminal investigation is over.

The DOJ is required to respond to our FOIA request within 20 business days. If the DOJ doesn’t respond, or if it refuses to produce the information we’ve requested, we are prepared to take them to federal court. We are already in federal court now in our lawsuit against the U.S. Department of State over its deletion of official press briefing video to hide lies about the Iran deal negotiations, and we anticipate that we will be in court soon regarding other legal requests we’ve made to the Obama Administration regarding its manipulation of the Orlando terrorist’s pledge of allegiance to ISIS.

We’ve also submitted FOIA requests to the State Department regarding its efforts to stop the ISIS genocide against Christians, and to the U.S. Department of Homeland Security over its decision to purge “offensive” Islamic terms, such as “jihad,” from law enforcement and intelligence training material and other government documents.

So while the Obama Administration consistently displays unethical, lawless behavior, the ACLJ will consistently demand accountability.

We still live in a democracy – one in which our nation’s leaders and representatives are to avoid impropriety and be under the rule of law. If we want to continue living in a democracy and keep our freedoms, we need to fight against corruption. We need to hold our leadership accountable.

Fight with us. Join our efforts by signing our petition demanding Attorney General Lynch’s resignation and our petition to hold the corrupt, lawless Obama Administration accountable today.