What if your child or grandchild’s public school forced them to write out the Shahada – the Islamic conversion creed – while ”having skipped Christianity”?

What if your child’s study guide had a section called “Origins of Islam” that included statements such as, “Around the age of 40, the angel Gabriel told Muhammad that he was to be a prophet of Allah.”?

Stated as fact, not belief.

Yet, according to reports and numerous contacts to the ACLJ, that is exactly what is happening.  In fact, children are being forced to learn how to convert to Islam and recite that “Allah is the only God.” 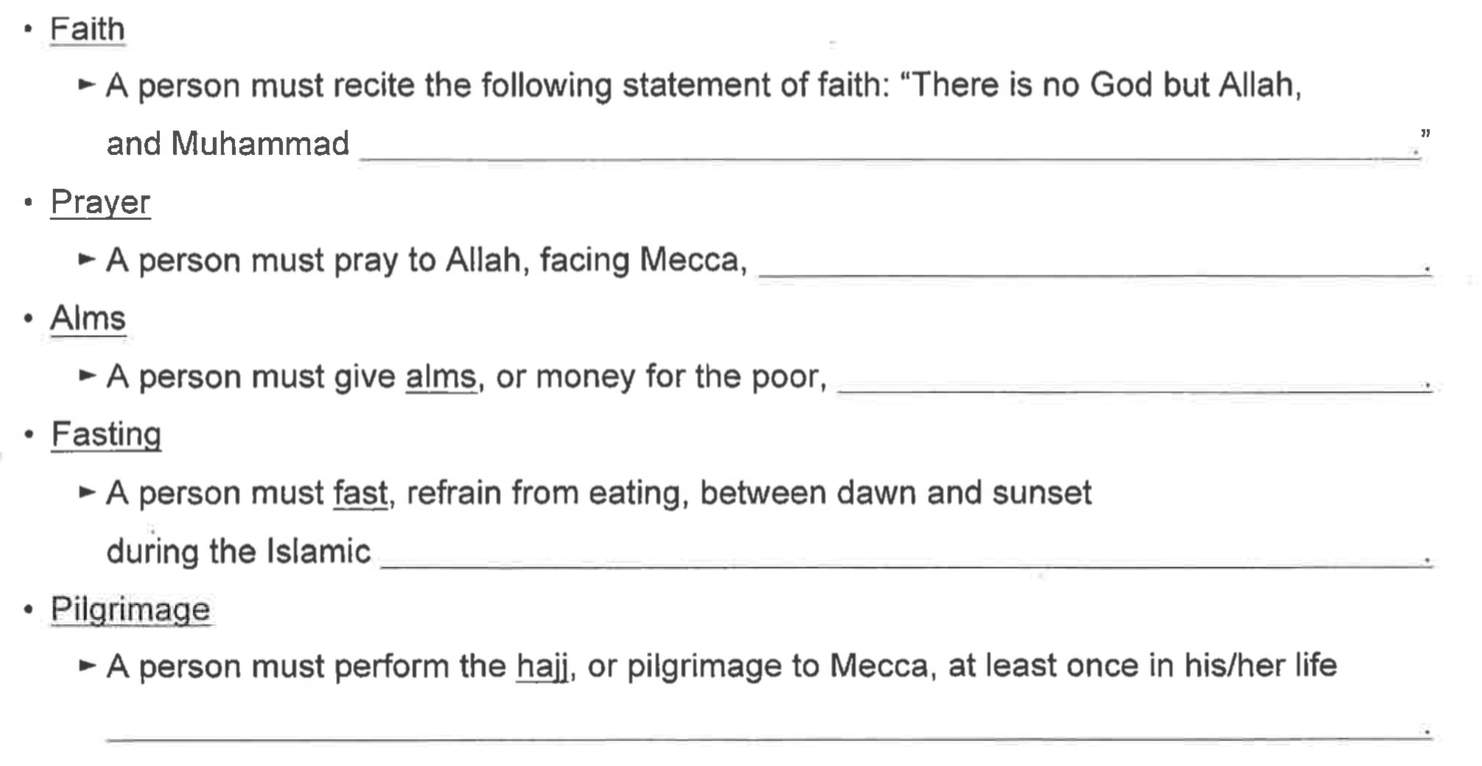 In Tennessee, these are realities facing parents of middle schoolers. Parents and concerned citizens from at least three counties have contacted us at the ACLJ with concerns about what their students are being taught.

As Fox News reports, parents like Brandee Porterfield are speaking out about what their children are experiencing:

Tennessee parents are voicing their concerns about a middle school history assignment in which students were asked to write "Allah is the only God."

Brandee Porterfield joined "Fox and Friends" this morning, saying she has no problem with her seventh-grade daughter learning about Islam as part of world history, but believes time should also be devoted to Christianity.

"They did this assignment where they wrote out the Five Pillars of Islam, including having the children learn and write the Shahada, which is the Islamic conversion creed," she explained.

Porterfield said she spoke with the Spring Hill Middle School teacher and principal, who said there would not be similar lessons on Christianity and Judaism.

She said she reviewed the state standards and there are upcoming lessons on Hinduism and Buddhism.

Unlike the lessons on Islam, however, Porterfield said students would not be expected to memorize a creed dealing with those religions.

Maury County school officials refuse to acknowledge the blatant constitutional violations at issue here, merely stating that they “covered some sensitive topics” that “caused some confusion.”

That’s outrageous.  The indoctrination of students with the precepts of converting to Islam and forcing them to recite “Allah is the only God” aren’t “sensitive topics”; it’s unconstitutional.

School officials claim “By the end of the year, students will have studied Buddhism, Hinduism and other religions,” but there is no indication as to what will be covered or for how long.

School officials indicated that in contrast the class would pay mere lip service to Christianity.  As the Daily Caller notes:

[I]t appears that Tennessee students don’t study Christianity per se. There is not, for example, one class day dedicated to the basic Jesus story.

[School officials] promised that students would eventually come across a reference to Christianity when history teachers reach the “Age of Exploration” in eighth grade. Then, students will hear about Christians persecuting other Christians in some countries in Western Europe.

But the problem could be much bigger than one school and one assignment.

Our client in neighboring Williamson County said that as part of the middle school class work on Islam – in addition to the worksheet his son was asked to fill out (two portions of which are above) – his son was forced to recite things in Arabic without even being told what it meant.

And this isn’t just an issue in one state. Earlier this year, we reported that public school students in Madison, Wisconsin were given an assignment to “pretend you are Muslim,”  while public school students in Florida were instructed to recite the Five Pillars of Islam as a prayer, make Islamic prayer rugs, and perform other Muslim rituals. Suspiciously, the textbook discussing Islam had chapters missing. Which chapters? Those on Christianity and Judaism.

To put this in perspective, imagine the outcry from the ACLU, Freedom From Religion Foundation (FFRF), and other leftist and angry atheist organizations if a study guide stated, “Jesus is the Son of God,” and forced children to recite the Lord’s Prayer.  These organizations would be beside themselves claiming indoctrination of our public school students.

But where are these organizations now?

At the ACLJ, we’re taking direct action.  We’re in direct contact with a number of parents and concerned citizens, we’re taking on new clients, and preparing critical demand letters and open records requests to these schools and school districts.

Religious liberty must be protected and Islamic indoctrination must be stopped.

It is a clear constitutional principle that public education may not indoctrinate young minds into a religion. Teachers and schools may teach what different faith traditions believe and how that has affected world history and geography.  But a school cannot censor Christianity and promote Islam.

As we take direct action to defend religious liberty and expose the truth, we need you to stand with us.

Join with us by signing our petition below and to defend religious liberty and stop Islamic indoctrination in our schools.