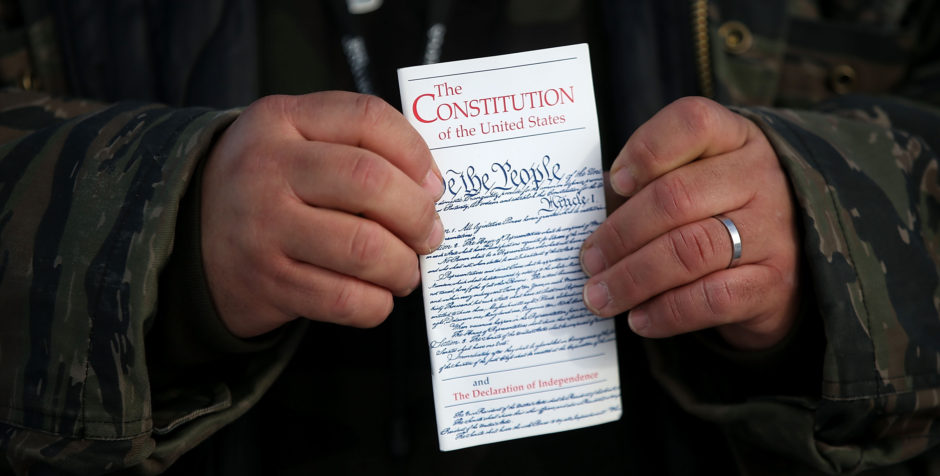 The long-simmering battle between the federal government and the state of California’s lawless agenda has erupted as part of escalating conflict last week after the Justice Department filed a lawsuit seeking to strike down the state’s attempt to usurp federal authority and write its own immigration laws.

Attorney General Jeff Sessions, in a dramatic move, told a gathering of law enforcement officers on Wednesday that “California … is using every power it has—powers it doesn’t have—to frustrate federal law enforcement. So you can be sure I’m going use every power I have to stop them.”

In a defiant move, Governor Jerry Brown called Attorney General Sessions’ visit to California a “political stunt.” The governor also said that the Justice Department lawsuit means going to war against the state of California.

The reality is that California has declared a legal war on our constitutional republic. It is lawlessly attempting to thwart the separation of powers and federalism. It is Governor Brown and his leftist allies who are trying to pull a political stunt at the expense of our Constitution.

The Justice Department has rightly prioritized cracking down on cities that fail to comply with federal immigration law – called "sanctuary cities."

Unlike the prior Administration that attempted to undermine the separation of power and was struck down at the Supreme Court, this Administration is working to uphold these federalist principles.

Consistent with this priority, the Justice Department announced that the federal government will fight California’s irrational, unfair, and unconstitutional policies. It has laid down the gauntlet to California and every other state or local jurisdiction that wishes to enact its own immigration policies in a bid to thwart the federal government from fulfilling its duty to protect our borders and to enhance America’s national security.

It is clear that the law and the Constitution favors a restoration of sanity to America’s broken immigration system by first upholding the rule of law. Congress has the Article I power to enact legislation and the President has the Article II powers to take care to enforce the law.

Inconsistent with federal power and the Supremacy Clause, it is worth noting that one of the three California laws being challenged by the Justice Department prohibits private employers from “voluntarily cooperating with immigration officials” and requires employers to give employees advance notice of a potential worksite enforcement inspection. Another law, Assembly Bill 103 adopted June 27th of last year, authorized the California AG to inspect federal immigration detention facilities in the state to examine the “due process provided” immigration detainees, and “the circumstances around their apprehension and transfer to the facility.” This law also requires detention facilities to provide state officials access to confidential federal records. This approach, if allowed would place the federal government and America’s immigration policy under the direct supervision of the states.

Think about it. This leftist State is actually going to punish private employers who comply with federal law and had the audacity to assert that it must be allowed to inspect federal facilities. This turns the Constitution on its head. It’s lawlessness plain and simple.

This is an outrageous assault on the rule of law, the Supremacy Clause of the Constitution. It cannot stand.

The United States Supreme Court made clear in 2012, in a case called Arizona v. United States that the federal government had the power to enjoin state action that violates federal immigration laws – laws duly enacted by Congress.

Writing for the majority of the Supreme Court, Justice Anthony Kennedy observed that it was impermissible under the Constitution for a state to pursue policies that undermine federal law. As one commentator put it:

In Arizona v. United States, the Supreme Court made two points clear in an opinion authored by Justice Anthony Kennedy. First, the federal government “has broad, undoubted power over the subject of immigration and the status of aliens.” And second, “that federal law ‘shall be the supreme Law of the Land,” and “under this principle, Congress has the power to preempt state law.” The Court then explained that federal law preempts state law where Congress expressly withdrew “specified powers from the State” or “so pervasively” regulated an area of the law that it “left no room for the States to supplement it,” or where the state law conflicts with federal law. Applying these well-established principles of preemption, the Supreme Court struck down three of Arizona’s provisions.

The Arizona holding will govern the DOJ’s current case against California, and it is difficult to conceive of a situation in which all three California statutes will survive. As the Court in Arizona made clear, state statutes that conflict with a federal law are preempted, and, “This includes cases where ‘compliance with both federal and state regulation is a physical impossibility,’ and those instances where the challenged state law ‘stands as an obstacle to the accomplishment and execution of the full purpose and objectives of Congress.’”

California, and other sanctuary cities and states, seek to obstruct the federal government in its execution of federal immigration law. While the Obama Administration condoned this conduct, Attorney General Jeff Sessions made clear with this lawsuit that his DOJ will not tolerate it.

It is obvious that California and other rogue state and local government officials and politicians have a problem with federal authority when it fails to conform to their politically correct agenda. Rather than support the United States Constitution and the rule and of law it appears that many officials prefer to support a radical open-borders agenda that threatens American workers as well as our national security.

The ACLJ will continue to put the interest of the American people first. Accordingly, we are preparing to file a critical Amicus Brief in this case.

It is time to restore sanity to the United States’ immigration policy and stop state politicians who are driven by a radical lawless agenda that operates in violation of the Constitution.