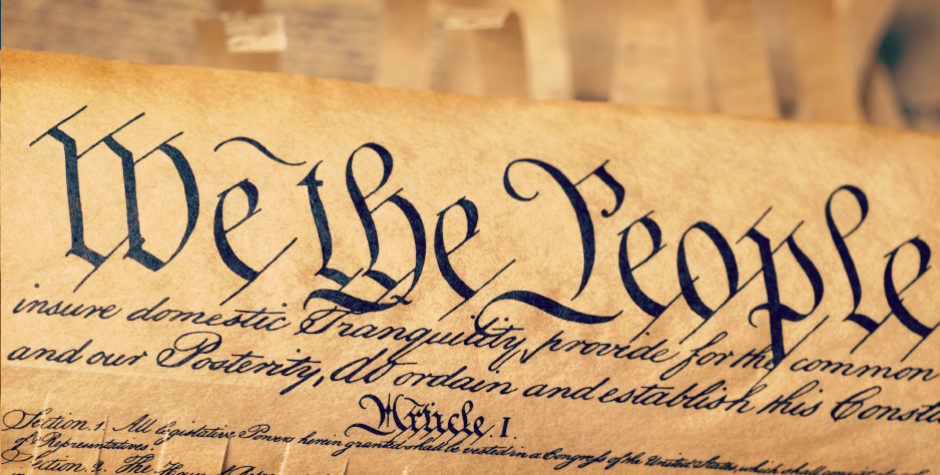 Deep State Actors Seek to Criminalize the Execution of the U.S. Constitution

Criminalizing the Execution of the U.S. Constitution

Although House Speaker Nancy Pelosi and leading Democrats support a baseless formal impeachment inquiry grounded on a questionable whistleblower complaint regarding a July 2019 phone call between President Trump and his Ukrainian counterpart, the record clearly shows the ongoing tympanic sound and fury regarding matters of “urgent concern” signify that Deep State actors who have always been propelled by the Trump derangement syndrome want to go further than simply undermine our constitutional republic in flagrant disregard for the rule of law.

Now Deep State actors want to criminalize the President’s execution of his Article II powers within the meaning of the U.S. Constitution.

If Deep State actors get their way, they would criminalize the very execution of the President’s constitutional power – thus threatening the very existence of our republic and the text of the Constitution itself – in order to force a duly elected President from office all because he has unleashed Attorney General Barr to investigate the investigators who conspired to commence the corrupt Russian collusion narrative in the first place.

This is precisely what Deep State actors are attempting to do. They are trying to thwart President Trump’s efforts to ferret out information on possible criminal activity involving U.S. actors in connection with the whole Russian collusion narrative that collapsed under the weight of Special Counsel Mueller’s ponderous investigation. They also want to criminalize the President’s pursuit of Ukrainian information regarding possibly unethical or possibly criminal activity involving the former Vice-President of the United States and his son.

Despite the hysteria of the Left and the mainstream media surrounding the whistle blower complaint (hearsay that was completely undercut when President Trump, out of abundance of transparency, released the actual transcript of his phone call with President Zelensky of Ukraine), it is clear beyond question that President Trump, in asking for Ukrainian assistance, acted consistently with the four corners of the Treaty with Ukraine on Mutual Legal Assistance in Criminal Matters. This treaty was signed on July 22, 1998 and transmitted to the U.S. Senate on October 19, 1999 by then-President Bill Clinton. This treaty was ratified by the Senate on October 18, 2000.  All of this is consistent with the United States Constitution.

The purpose of the U.S./Ukraine treaty is clear: to “counter criminal activities more effectively.” The treaty was designed to provide for a

“broad range of cooperation in criminal matters. Mutual assistance available under the Treaty includes: taking of testimony or statements of person; providing documents, records, and articles of evidence; serving documents; locating or identifying persons; transferring persons in custody for testimony or other purposes; assisting in proceedings related to restraint, confiscation, forfeiture of assets, restitution, and collection of fines; and any other form of assistance not prohibited by the laws of the requested state.”

In fact, the Treaty specifically acknowledges that it does not prevent the two nations from granting assistance to each other through other applicable international agreements or provisions of respective national law. And, “[t]he Contracting States may also provide assistance pursuant to any bilateral arrangement, agreement, or practice which may be applicable.” (Article 18).

Additionally, the Treaty does not describe and does not purport to describe the limits of a President’s constitutional authority. It neither constrains nor diminishes a President’s Article II authority to enforce the laws of the United States, nor could it. It is merely a tool available to a U.S. President to facilitate mutual assistance and provides agreed upon procedures through which a particular request may be made and responded to.

By the way, the U.S. Senate ratified the Treaty, endorsing the President’s constitutional authority to act pursuant to the Treaty – and as the Treaty itself recognizes, to obtain any other form of assistance not expressly identified in the Treaty.

All impartial observers agree that President Trump’s phone conversation with President Zelensky is consistent with his pursuit of evidence of criminal activity engaged in by U.S. actors that triggered the 2016 Russia collusion narrative or other possible criminal activity engaged in by U.S. actors. Indeed, Attorney General Barr has engaged in a transnational investigative efforts with a number of countries including Australia in order to determine whether illegal spying on the Trump campaign took place.

This should surprise no one. All of this is consistent with the rule of law, our treaty obligations with a number of countries, and the United States Constitution.