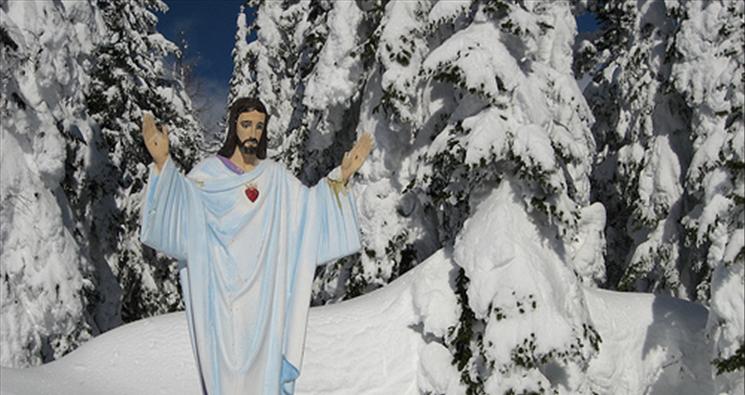 It is an organization that is dedicated to removing any vestige of our religious history and heritage in this country. I'm talking about the Freedom From Religion Foundation (FFRF) - an atheist, anti-Christian group - that we have battled over the Pledge of Allegiance, the National Day of Prayer, and even the National Motto.

Now, the FFRF is targeting another historic display - this one in Montana - a statue of Jesus placed on Big Mountain at the Whitefish Mountain Resort nearly 60 years ago. The display was erected in the 1950's by World War II veterans who were also members of the Knights of Columbus. These veterans were inspired by monuments they saw in the mountains of Europe during the war. They put this statue of Jesus in place atop Big Mountain to commemorate the service of local WWII veterans - a war memorial. The display represents a significant piece of the history and heritage of Montana.

But, the FFRF calls the memorial "a ruse and a sham" and is urging the U.S. Forest Service to end a long-standing lease - a move that would force the display to be removed. Once again, the FFRF is taking its twisted view of the U.S. Constitution and putting pressure on the federal government to remove a time-honored display.

The fact is the Supreme Court has repeatedly upheld the constitutionality of war memorials and other symbols of our history and heritage. The display in Montana is constitutionally sound and is not a violation of the Establishment Clause. That is exactly why we're standing up to the FFRF.

You can imagine the outrage in the local community where this is taking place. One veteran said removing the display would be "a slap in the face of the men and women who served their country and built this community." Another local resident simply asked: "Why don't they just leave us alone?"

The head of the Whitefish Mountain Resort says the display is "another piece of the mountain's history that we want to preserve." And, he placed a plaque at the site that states: "We thank those brave troops that brought this special shrine of Christ to the Big Mountain and hope that you enjoy and respect it."

Montana Congressman, Denny Rehberg, is bringing attention to this issue, too, and working to keep the display in place. "It’s really too bad that a few individuals from out-of-state are so eager to ruin something that almost everyone in the community supports," said Rehberg.

That's why your voice is so important. Stand with us now. Sign on to our Letter of Support for the Statue of Jesus in Montana. We've successfully challenged the FFRF - the atheist, anti-Christian group - in the past. Now, it's time to stand-up again.

As the Forest Service accepts public comment on this issue, there's a brief window of opportunity to have your voice heard. Stand with the ACLJ and sign on to our letter now. Let the federal government know that this display is not only part of the history and heritage of Montana, but a constitutional war memorial. We are urging the Forest Service to renew the lease without delay.

Our letter of support is posted here. Please add your name now.

We'll keep you updated on this important issue.