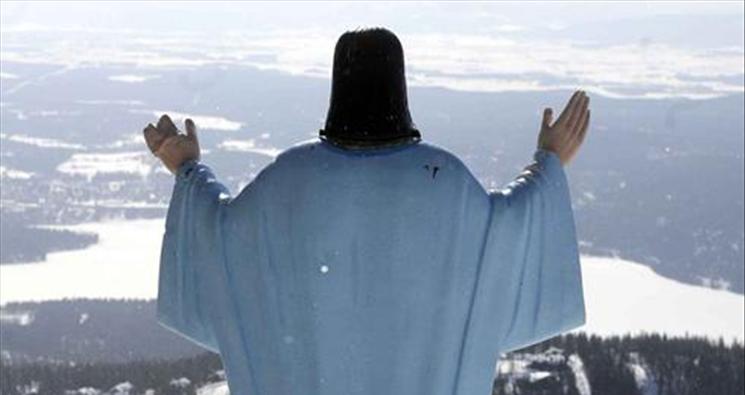 Anything that could have a religious connotation offends them, and when it offends them, the Constitution requires that it be removed. That is the argument that the Freedom From Religion Foundation (FFRF) and other angry atheist groups try to make in court time and time again.

This time it’s a nearly 60-year-old war memorial statue of Jesus – erected by World War II veterans as a reminder of the many similar statues they saw as they fought across Europe.

The Freedom From Religion Foundation’s argument is simple: they are offended by the presence of the war memorial statue of Jesus and believe that the Establishment Clause exists to prevent their being offended.

In fact, their lawsuit actually alleges that FFRF members “have altered their conduct to avoid Big Mountain because of the Jesus statue.” It also goes so far as to allege that the presence of this memorial on Big Mountain “makes a sham of the Establishment Clause.”

As the FFRF points out in their lawsuit, after the National Forest Service initially decided to have the memorial removed, the ACLJ “zealously” responded on behalf of “more than 70,000 … supporters” with a letter defending the legality of the war memorial.

In that letter, the ACLJ explained that the Constitution does not require that the Jesus statue war memorial be torn down as Freedom From Religion Foundation asserts. In response to both the ACLJ’s letter and the Freedom From Religion Foundation’s complaint, the National Forest Service agreed with our analysis and reapproved the lease of the property on which the Jesus statue stands.

The Supreme Court’s decisions upholding the constitutionality of historical displays of this nature support the National Forest Service’s decision.

In Lynch v. Donnelly, the Supreme Court acknowledged that “[t]here is an unbroken history of official acknowledgment by all three branches of government of the role of religion in American life from at least 1789.”

As we wrote in our letter, the Supreme Court in Zorach v. Clauson expressly struck down Freedom From Religion Foundation’s assertion that the Constitution forbids all monuments with religious connotations. The Court stated:

We are a religious people whose institutions presuppose a Supreme Being. We guarantee the freedom to worship as one chooses. We make room for as wide a variety of beliefs and creeds as the spiritual needs of man deem necessary. We sponsor an attitude on the part of government that shows no partiality to any one group and that lets each flourish according to the zeal of its adherents and the appeal of its dogma. When the state encourages religious instruction or cooperates with religious authorities by adjusting the schedule of public events to sectarian needs, it follows the best of our traditions. For it then respects the religious nature of our people and accommodates the public service to their spiritual needs. To hold that it may not would be to find in the Constitution a requirement that the government show a callous indifference to religious groups. That would be preferring those who believe in no religion over those who do believe.

Despite Freedom From Religion Foundation’s goal, the Supreme Court has made clear that the Constitution’s “goal of avoiding governmental endorsement does not require eradication of all religious symbols in the public realm.” Stated differently, “religious symbols on public property are not, per se, unconstitutional.”

As our letter to the National Forest Service explained, “[T]he Supreme Court . . . [has] established that whether permanent religious displays on government property violate the Establishment Clause requires a detailed analysis of the facts surrounding the display’s history, setting, and use.”

Considering those facts leads to precisely the conclusion reached by the National Forest Service: the war memorial does not violate the Constitution.

A private organization, the Knights of Columbus, built and maintained the [Jesus] statue in 1953 to remind the community of the tragedies of war. It was modeled after statues encountered by WWII soldiers in European towns and villages. The Forest Service’s archaeologist recognized the historical importance of the Montana statue and the Montana Historical Society agreed. Thus, the statue’s purpose was “not . . . to set the imprimatur of the state on a particular creed. Rather, those who erected [it] intended simply to honor our Nation’s fallen soldiers.” Salazar v. Buono, 130 S. Ct. 1803, 1816-17 (2010) (plurality).

As our letter concluded, “The statue’s history and purpose, its longevity, and its setting all support the conclusion that no reasonable observer could think that renewing the Knights of Columbus’ special use permit would be an unconstitutional endorsement of religion.”

The ACLJ is preparing an amicus to defend this historic war memorial in court. Add your name to our brief here.