We're gathered today, just as we have gathered before, to remember those who served, those who fought, those still missing, and those who gave their last full measure of devotion for our country.

Few in modern times have spoken as eloquently as President Reagan on the subject of our Veterans.  He continued with his 1988 Veterans Day address:

Our nation itself is testimony to the love our veterans have had for it and for us. Our liberties, our values, all for which America stands is safe today because brave men and women have been ready to face the fire at freedom's front. And we thank God for them.

How right he was.  Just imagine, what if American warriors had not resisted Hitler’s war machine?  What if American warriors had not stood firm against Japanese imperialism in the Pacific?  What if we had no defense to the violence and terror of radical Islam?  Whether on “the shores of Tripoli” or the modern warfront of today? What if, through the decades, our Veterans had refused to answer the call to repel evil and to protect the weak of the world? What if we didn’t have “our thunder” in the air?

Through time, how many acts of war or terror never came to pass—simply because our military was there?  Simply because, “Men in rags, men who froze, Still that Army met its foes?” Because of our “anchors” in the “blue of the mighty deep.”

You can be certain that, but for the force and sacrifice of our Veterans, the very face of our nation—and even the entire world—would be so fundamentally different.

It's impossible to be too thankful for our veterans—those who put themselves in harm's way to not only protect our security and freedom, but that also fight against all that is evil around the world.

Whether on the beaches of Normandy or the jungles of Vietnam, the deserts of the Middle East or the tropics of Japan, the men and women you see today who served, whether you know them or not, need more than just our gratitude, attention for a day, and prayers. They need us to live a life worth the sacrifice they gave. Because no matter how we serve the communities around us, those very communities would not exist without them.

As President Reagan concluded his address, he placed a note on the Vietnam Wall, which said:

[Y]ou fought for your country and for its safety and for the freedom of others with strength and courage. We love you for it. We honor you. And we have faith that, as He does all His sacred children, the Lord will bless you and keep you, the Lord will make His face to shine upon you and give you peace, now and forever more.

But you don’t have to have a President’s podium to honor our veterans:  I will never forget the photograph of President George W. Bush hugging an American warrior.  That hug embodied every noble word that could be spoken. 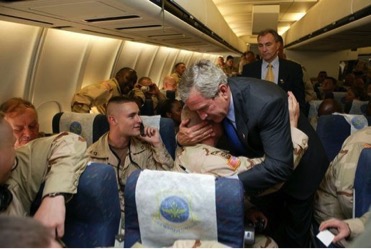