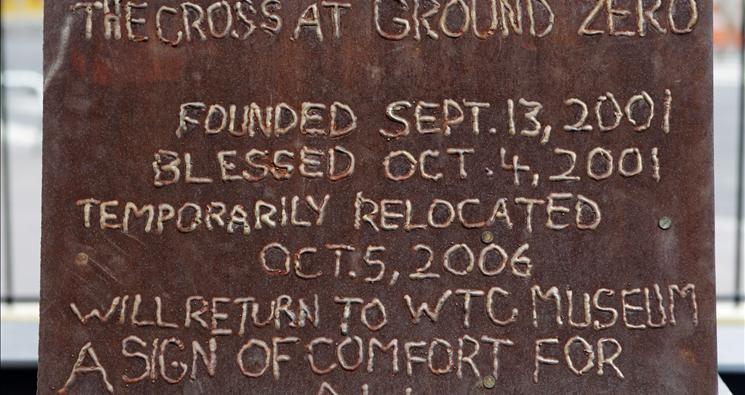 In the tumultuous days following the worst terrorist attack in U.S. history, workers at Ground Zero discovered a sign of hope and comfort – a cross – two intersecting steel beams from Tower One of the World Trade Center standing in the midst of so much death and destruction.

In the decade since 9/11, the Ground Zero Cross has become a symbol of hope and healing for those who survived the terrorist attack, the families and friends who lost loved ones on that day, and the coworkers of the brave first responders who made the ultimate sacrifice.

This historical artifact of the 9/11 attacks is, lawsuit notwithstanding, going to be featured in the new 9/11 Memorial and Museum. Unfortunately, angry atheist syndrome has reared its ugly head again. As soon as the cross selection was announced the American Atheists organized filed suit, claiming it violated the Establishment Clause of the First Amendment.

The group actually claims that its members are experiencing “dyspepsia [upset stomach], symptoms of depression, headaches, anxiety, and mental pain and anguish,” not from the devastating destruction of life caused by the terrorists on 9/11, but as a “direct and proximate result of the unconstitutional existence of the cross.” That’s not a line from a blog post, a press release, or a fundraising letter; that is the actual legal argument presented by the American Atheists in their complaint.

It doesn’t take a lawyer to realize that this is an utterly preposterous proposition.

At the ACLJ, we are taking action to defend the Ground Zero Cross.  We are preparing to file an amicus brief representing Tim Brown, a 9/11 firefighter and first responder who lost 100 hundred of his closest friends and colleagues at Ground Zero.

Our initial legal analysis of their complaint reveals that while the lawsuit argues that it is unconstitutional to “plac[e] a religious symbol of Christianity on government-owned property,” it “fail[s] to note that the cross is actually a remnant of the ruins of the Twin Towers.”

Even other atheists recognize that this is a “frivolous lawsuit.”  Susan Jacoby (a fellow contributor to the Washington Post's On Faith blog) on her “The Spirited Atheist” blog acknowledges that the American Atheists’ suit “misconstrues the First Amendment,” wondering whether the president of the American Atheists, David Silverman, “really believes this nonsense,” although she can't resist a swipe at something faith-based, this time at government-funded charities with religious affiliations - which, she fails to mention, by law must segregate those funds from any used for proselytizing - that is the real First Amendment “problem.”

What’s even more disconcerting than the lawsuit itself is what some of the atheist plaintiffs are saying about a 9/11 relic that has comforted so many.  One plaintiff called the cross-shaped steel beams an “ugly piece of wreckage” that “does not represent anything . . . but horror and death.“ Another called it “offensive and repugnant.” The communications director for American Atheists can’t figure out if the cross is just a “t” or a religious icon. How can they get so physically sick and mentally ill over crossed metal beams when they deny God exists? I suspect there is something deeper at issue for these atheists but that is for another discussion.

As the head of the National September 11 Memorial & Museum so aptly noted:

This steel remnant became a symbol of spiritual comfort for the thousands of recovery workers who toiled at ground zero, as well as for people around the world. In the historical exhibition, the Cross is part of our commitment to bring back the authentic physical reminders that tell the story of 9/11 in a way nothing else can.

This is what the ACLJ is defending with our brief – a monument to those who lost their lives at Ground Zero and a symbol of hope and healing for the survivors and 9/11 families.

This article is crossposted at Jordan's Washington Post On Faith blog.  Please keep the conversation going by registering to comment on the Washington Post site to show your support for this important historical relic that has brought comfort to so many.