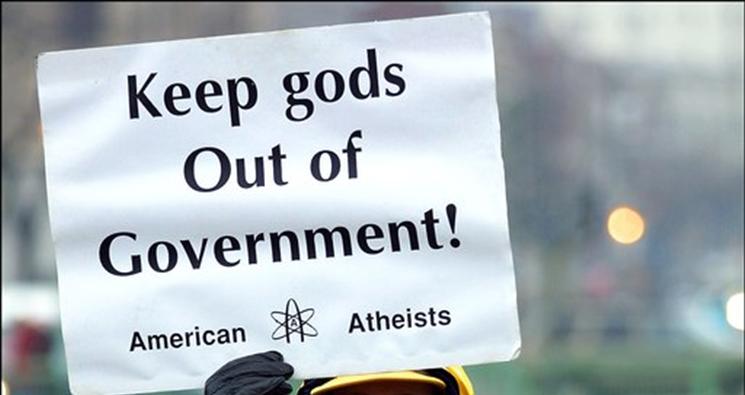 It is with the utmost urgency that I write this blog.

A group of atheists have filed a lawsuit to prevent the inclusion of the historic Ground Zero Cross at the 9/11 Memorial & Museum. We have learned from their lawsuit that they, “have suffered, are suffering, and will continue to suffer damages, both physical and emotional, from the existence of the challenged cross.” Atheists have reportedly endured cross-induced, “dyspepsia [upset stomach], symptoms of depression, headaches, anxiety, and mental pain and anguish.”

In order to ensure that atheists in America never again experience any of the aforementioned ailments, I need your assistance in writing “The Complete Idiot’s Guide to Protecting American Atheists.”

To help you get started, I’ve identified things that must be removed or altered immediately to rectify the government’s continued disregard for the hurt feelings of godless Americans.

-The Ground Zero Cross at the 9/11 Memorial and Museum.

-The National Motto: “In God We Trust”

-“Under God” in the Pledge of Allegiance

-The National Day of Prayer

-Original copies of the Declaration of Independence in the National Archives, which reference “our Creator” and “Nature’s God”

-The Chaplains Corps of each branch of the U.S. Military

-All “Religious” Artwork in the National Gallery of Art

-Surviving copies of The National Anthem, which includes the phrase “In God is our trust”

-On the Lincoln Memorial are etched the word of the Gettysburg Address (“this nation, under God, shall have a new birth of freedom”) and his Second Inaugural Address (“with firmness in the right, as God gives us to see the right,”) which are replete with references to God

-The Jefferson Memorial’s dome includes this inscription about God, “I have sworn upon the altar of god eternal hostility against every form of tyranny over the mind of man.” There are other references to God in the memorial

-On the Tomb of the Unknowns at Arlington National Cemetery is inscribed, “Here rests in honored glory an American soldier known but to God”

-The federal courthouse containing the Court of Appeals and the Federal District Court for the District of Columbia contains a sculpture, which includes a cross and the Ten Commandments

-The metal gates on the north and south sides of the U.S. Supreme Court Courtroom contain the Ten Commandments, as well as the doors leading to the courtroom

-Inscribed on the wall of the Cox Corridors of the U.S. Capitol is the phrase “America! God shed his grace on Thee”

-The chamber of the U.S. House of Representatives features Moses.

-The Prayer Room of the U.S. Capitol contains the phrase “Annuit coeptis” (translated “God has favored our undertakings”) and the words of Psalm 16:1

-The House Chamber of the U.S. Capitol contains the National Motto “In God we trust”

-Inscribed in the Senate Chamber of the U.S. Capitol are the phrase “Annuit coeptis” (translated “God has favored our undertakings”) and the National Motto “In God we trust”

-The U.S. Constitution itself references “Year of our Lord”

-Zorach v. Clauson, 343 U.S. 306 (1952), where the Supreme Court declared, “We are a religious people whose institutions presuppose a Supreme Being”

Please leave your additions to “The Complete Idiot’s Guide to Protecting American Atheists” in the comments section on the Washington Post site.

Together, we can protect atheists from references to American history.

This article is crossposted at Jordan's "Religious Right Now" blog on the Washington Post.  Please keep the conversation going by registering to comment on the Washington Post site to help grow "The Compete Idiot's Guide to Protecting American Atheists."  Also, please "Like" and leave your suggestion on the Jordan Sekulow Show Facebook page, so Jordan can read your additions on air and include them in his next edition of The Compete Idiot's Guide.