A new report from the Government Accountability Office reveals what we’ve been saying all along: ObamaCare funds abortion.

Put more directly: you are paying for abortion with your federal tax dollars in direct violation of federal law.

In fact the new report details a myriad of ways that despite promises from President Obama and his pro-abortion allies and in spite of federal laws, the language of ObamaCare itself, and an Executive order abortion is not only being subsidized with federal tax dollars, but in some instances ObamaCare participants are being forced to pay for abortion coverage.

Here’s the devastating line from the GAO report, “Among a sample of 18 insurers, ‘all but three issuers indicated that the [abortion coverage] benefit is not subject to any restrictions, limitations, or exclusions.’”

Federal law requires that funding for abortion coverage be segregated so that federal dollars don’t pay for abortion.  Sound familiar?  It should because it’s a similar accounting gimmick to what is being proposed by the Obama Administration to force Christian business owners and religious organizations to pay for their employee’s abortion pills without looking like they are paying for their abortion pills.

It’s not only a gimmick; we now know it won’t be followed.

Despite federal law banning the use of federal tax dollars to pay for abortions, ObamaCare is doing just that.

There are widespread instances of Obamacare insurance plans violating the rigid rules surrounding whether customers can use federal health care subsidies on insurance policies that cover abortion procedures, according to a Government Accountability Office investigation.

“Widespread” violations of federal law right under the Obama Administration’s nose, and what’s the Administration going to do about it?

“The Obama administration, in a response to a draft copy of the report, defended its actions.”

Of course it did.

So with 15 of 18 sample plans in violation of federal law, using federal subsidies to pay for abortion coverage, and 87% ObamaCare enrollees getting subsidies, well you do the math.  That’s a gross misuse of federal taxpayer dollars.

In other words, it’s an ObamaCare lie that is funding the slaughter of unborn children at the taxpayers’ expense.

Under the plain language of ObamaCare, there must be at least one healthcare plan that doesn’t cover abortion (subject to some modest exceptions).  The GAO report (as shown in the chart below) found that 5 states, Connecticut, Hawaii, New Jersey, Rhode Island, and Vermont, have no qualifying non-abortion plan. 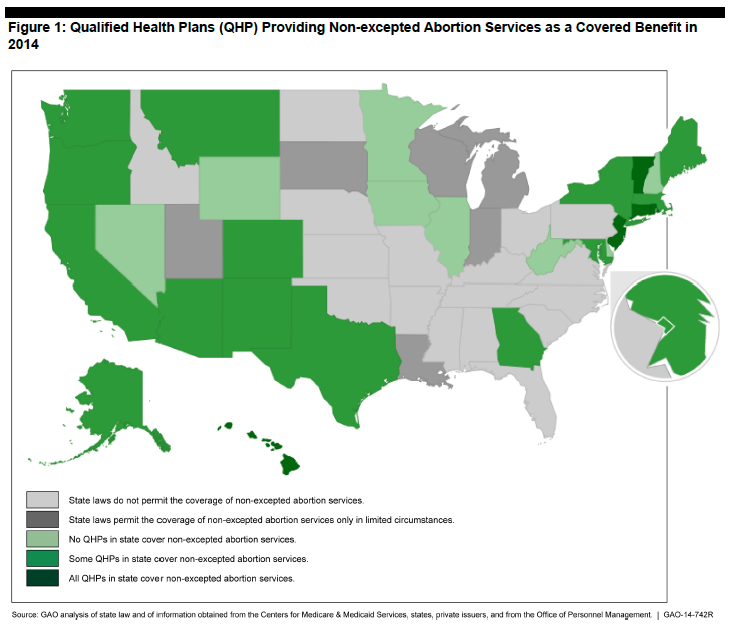 Nearly half of all qualified health insurance plans under ObamaCare cover abortion.  But we were promised no tax dollars would be used pay for them – a lie – and we were promised that every American would have the options not to pay for abortion – another lie.

Then there is yet another ObamaCare abortion lie exposed.

The report details that in some cases, despite ObamaCare’s requirements, insurance companies are failing to inform applicants that their insurance plan covers, and thus they are paying for, abortion.

For years, we’ve been tenaciously arguing that ObamaCare funds abortion.  And for years, the Obama Administration has decried those claim as fear mongering.  Now, the Administration is being forced to admit the truth.

The problem is they won’t actually do anything to enforce the law and ensure that ObamaCare doesn’t fund abortion.  But that was the point.  ObamaCare was passed by the pro-abortion Left as the largest expansion of taxpayer funding for abortion since Roe v. Wade (also something we’ve been saying since the law was first proposed).

Now we’re seeing the results, and the only way to turn back the pro-abortion leviathan is to repeal ObamaCare.